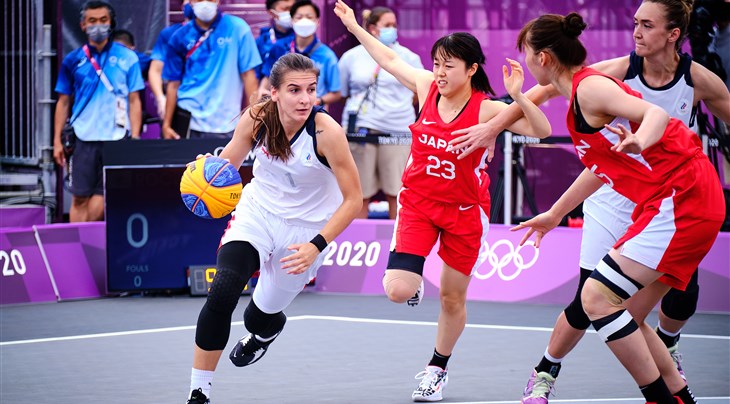 TOKYO (Japan) - History was finally made on July 24 with 3x3 making its grand Olympic debut in thrilling style at the Aomi Urban Sports Park in Tokyo.

And the wait was well worth it it with the Russian Olympic Committee (ROC)'s women spoiling the local party with a heart-stopping 21-18 victory over host Japan.

23-year-old ROC 3x3 star Olga Frolkina will forever be in the history books as the first-ever player to get a 3x3 bucket at the Olympic Games. The rising star buried a 2-pointer, which got the team rolling up to a commanding 13-6 lead.

You knew Japan would fight back and they discovered their hot shooting which has made them an Asian powerhouse. Mio Shinozaki inspired the comeback with 8 points to get Japan within 19-17 and ensure a thrilling finish - quite fittingly for 3x3's debut.

Under immense pressure, Yulia Kozik proved the hero with a two-pointer to end Japan's bold comeback as ROC hung on to cap a nail-biting opening 3x3 game in the Olympics.

Olga Frolkina powered ROC's hot start and finished with 7 points to make a statement in the opening game of the tournament.

Power to the youth

Impressively, six of the eight players in the game come from the U23 circuit. As a matter of fact, the game was rematch of the FIBA 3x3 U23 World Cup 2019 final. Japan had won that game. The Russian Olympic Committee got their revenge this time.

All eight teams compete in the same pool at the 3x3 Olympic tournament. This means that for both teams, it was just the first of seven pool games.