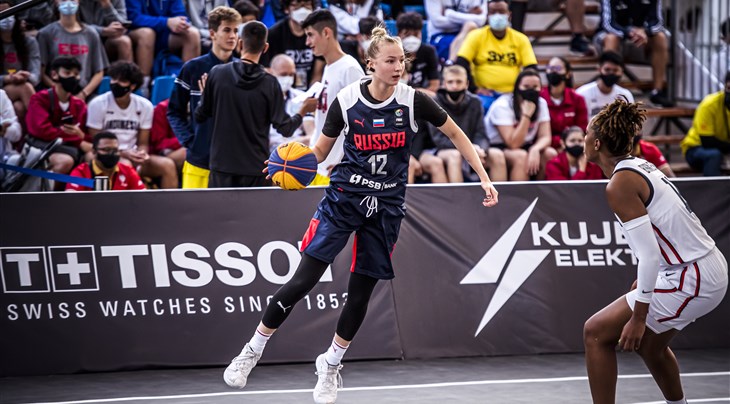 DEBRECEN (Hungary) – The runners and riders are beginning to separate themselves now as our 3x3 U18 World Cup quarter-finalists are slowly being confirmed following the completion of a terrific third day of action in Debrecen, Hungary.

Belarus and Russia did battle in the Women’s competition for the second qualification spot from Group B, and it came down to the wire to decide who would join the USA in the last eight of the competition, as the Russians secured an epic comeback against the reigning champions to progress. Ukraine continued their dominance in the Men’s competition, securing their third-straight 22-point win in their final pool game, and Kazakhstan impressed as well to join the Europeans in booking a quarter-final place for Saturday, and much more was decided in both competitions as well. Going into their final Pool B game against the USA, Russia had a very difficult task ahead of them as they needed to overcome the previously unbeaten Americans to have a chance of taking the second qualifying spot from Belarus. For large parts, it didn’t look likely, but as the game wore on the Russians grew in confidence and frustrated the Americans, before securing an epic comeback to win 20-17 on the night and book a place in Saturday’s quarter-finals. The Egyptians just have everything, don’t they? Bullseye shooting, interior dominance, great chemistry, highlights aplenty and they always find a way to win. Scoring 11 of her team’s 20 points in a clutch victory over the USA to book their place in the quarter-finals of this year’s 3x3 U18 World Cup gives Bocharova the undisputed rights to today’s Women’s Player of the Day. Almost faultless from the free-throw line and a fantastic leader for the Russians as they came from behind to secure what seemed like an unlikely victory at times, the 18-year-old was epic on Day Three of action and will certainly be one to watch as the tournament progresses. Well this young man had himself a day to remember! An eight-point performance in a vital 21-13 victory over Brazil was followed up by an incredible jam in the Dunk Contest qualification rounds, as the 17-year-old made sure everybody went home from Day Three talking about this young man’s talents.

Mikaylah Williams may have showed out once more for USA on Day Three, but its Janiah Barker who had the play of the day for the Americans as her crazy handles froze a defender and gave her an easy finish at the basket.

We’ve seen some crazy plays so far in Debrecen, and some super hustle – Ahmed Rehan gave us both in Egypt’s first game of the day as he threw a no-look pass from the floor to his open teammate to bury a two-pointer on the way to an important win over Belarus!