Road to USA's 3x3 Olympic gold was paved with adversity 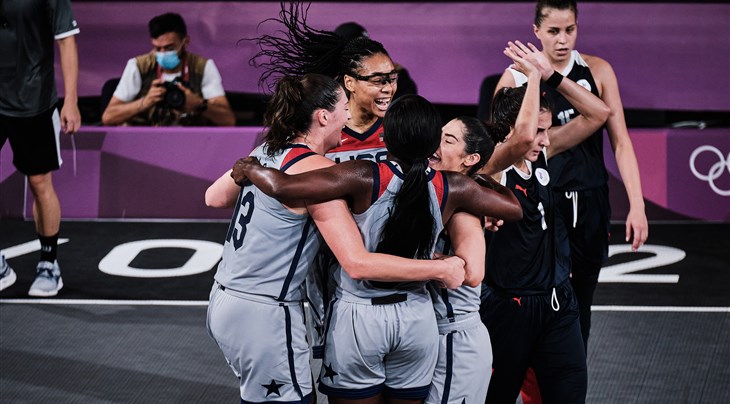 MIAMI (USA) - The journey to USA's 3x3 gold medal was challenging for more reasons than just the sport debuting at the Olympics for the first time ever and the pressure that comes with it.

Of course USA Basketball has a gold standard of excellence - the men’s 5-on-5 loss to France was their first in an Olympic setting since 2004, and the women’ 5-on-5 side are still undefeated since 1992.

For head coach Kara Lawson, and players Stefanie Dolson, Allisha Gray, Kelsey Plum and Jackie Young, they were about to go onto the world’s biggest stage as USA’s first ever 3x3 Olympic team, but their 6-0 Olympic Qualifying Tournament run and 5-1 Olympic Pool Round records show little about the difficulty behind bringing the gold home.

Not only was 3x3 a first time Olympic sport, but all four members of the team were also first time Olympians. Only coach Lawson had any sort of Olympic experience, yet she was not able to be on the sidelines with her team as coaches are not permitted to do so in 3x3 competition.

Dolson, who usually plays forward, recalls being far from Olympic form at this time last year due to quarantines restricting workouts and hurting mental health. But 29-year-old Dolson - nicknamed “Big Mama Stef”, bet on herself starting 2021 by losing 30 pounds and being named to the 3x3 team, and became unstoppable in the paint for Team USA, scoring in the top 7 of the tournament with 51 points in 9 games.

“It means a lot, I mean if you would’ve said to me that I was gonna be here winning a gold about a year ago, I would not have believed it. With COVID, quarantine and then the bubble, there’s just been so many ups and downs in the last year,” said Dolson.

Maybe the quickest ever journey to Olympic gold was Jackie Young’s, who was on vacation on a beach in Florida when she got the call that sharpshooter Katie Lou Samuelson - a key player in Graz, Austria netting 22 points in their 6 games - had tested positive for COVID-19 and would not be able to compete in the 3x3 event in Tokyo. Despite feeling overwhelmed and underprepared, Young came into the games and meshed well with her teammates and found the chemistry needed in order to come out on the other side with gold.

“It’s crazy honestly, but I’m glad I had the opportunity, I just did whatever I could to help this team win. I was a late addition but I just tried to catch on quick,” said Young, “Learn the plays, learn the defensive schemes and all that so that I could get thrown into the mix without messing up all the chemistry.”

For Allisha Gray, who has been part of Team USA’s national pool for three years, she finally got her shot at not only being an Olympic champion, but proving that humble beginnings only make the moment that much more important. Missing the FIBA Americas U18 Championship with an injury after being named to the team in 2012, this is Gray’s first gold medal with a Team USA squad, and 3x3 has proven to be second nature for the guard who was named tournament MVP of her inaugural 3x3 event, the Big Twelve International. Gray also sat in the top 10 of tournament scoring with 48 points through 9 games.

Exactly one year to the day of winning an Olympic gold medal, Kelsey Plum walked for the first time after suffering an Achilles injury that would cause her to miss the entire 2020 WNBA season. Since then, Plum has been an anchor to the 3x3 team with her quickness to the rim and ability to shoot. Leading the tournament in scoring with 55 points in 9 games, and coming in clutch for Team USA beyond the arc, calling game multiple times in the tournament with her 2-pt shots at the buzzer.

All four of the Olympic champions had their personal and team battles to get to Graz, and again to get to Tokyo, but their determination proved bigger than themselves and they were able to work as a unit to defeat the Russian Olympic Committee 18-15 in the gold medal game.

Head coach Kara Lawson, who was an Olympic champion herself in 2008 with the 5-on-5 squad, has instilled in the team that while winning is the goal, and gold is the standard, 3x3 is meant to be fast paced and fun, and she believes that if asked, many of the women would cite they like it better than their original game.

“It’s a fun game, the players really enjoy playing it, if you gave them truth serum they’d probably tell you they like it better than 5 on 5,” said Lawson.

“Hopefully the sport being on an Olympic platform will get more people interested in it and now Paris is only 3 years away instead of 4 so the work for USA Basketball continues.”

All things considered, Team USA didn’t have a cake walk to a gold medal the way everyone thought they would going into the games.

Even after adversity struck, even after the team got a reality check against home team Japan, and even after the game came down to the final seconds multiple times throughout the tournament, one theme remained consistent for Team USA: playing for each other.

With the win, there are hopes that 3x3 basketball will not only grow in America, with leagues already developing domestically, but also hope teams like Canada and Puerto Rico will develop to an Olympic level and continue to produce teams that compete on the FIBA 3x3 Tour the way many European countries have.