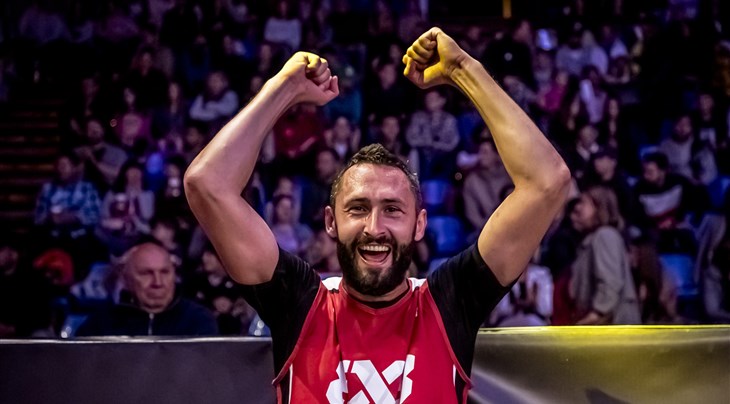 MONTREAL (Canada) - In-form Ub (SRB) will be aiming to stretch their lead on top of the FIBA 3x3 World Tour standings as they seek back-to-back Masters victories on September 4-5 in Montreal.

The No.2 seed top Pool B in the World Tour's much-anticipated return to North America for the first time since 2019 after last year's season was shortened due to the Covid-19 pandemic.

The new-look Ub, who were formerly Vrbas before last season, sit on top of the World Tour standings having reached the quarters in Doha and the final in Lausanne before taking out their first ever Masters victory with a triumph in Debrecen.

Dejan Majstorovic aka the 'Maestro' has rediscovered his best since helping Serbia clinch bronze at the Tokyo Olympics to justify Ub's efforts in recruiting the former Novi Sad star.

But the Serbs will have to do it the hard way with Debrecen MVP Miroslav Pasajlic not travelling to Montreal and the dynamo has been replaced by Milos Milovanovic.

Ub on day 1 will face No.7 seed Lausanne Sport (SUI) and locals Old Montreal (CAN). The much-hyped Swiss will be hoping for a breakout in 2021 having been bounced out early at home in Lausanne and Debrecen.

The field in Montreal, which is the second edition in the Canadian city, is loaded and headed by No.1 seed Riga (LAT), who lost a thriller to Ub in the Debrecen decider. But the Latvians have reloaded and added superhero Karlis Lasmanis who was absent in Hungary.

He teams up with his partner-in-crime Nauris Miezis who returned to top form after a subpar performance in Lausanne. 'Robin' took the cape in Debrecen, where he finished on top of player value (40.2).

Riga will boast three Olympic Gold medalists in Montreal with Edgars Krumins still on the sidelines having injured his ankle in the dying minutes of the Gold medal game against the Russian Olympic Committee.

The Latvians will be strong favorites for a clean sweep on day 1 against No.8 seed Raudondvaris Tauras (LTU) and No.9 Winnipeg (CAN).

Doha Masters champs Amsterdam Talent&Pro (NED) headline Pool C and consist of the same line-up who reached the semis in Debrecen. The Dutch brought the D to Hungary but their radar on offense was wayward as they relied on star Dimeo van der Horst for buckets.

Liman recruit Maksim Kovacevic and Arvin Slagter, who was the MVP in Doha, struggled to shake off rust in Debrecen after a lengthy layoff from the World Tour.

The Dutch face a blockbuster day 1 clash against Princeton (USA) who were knocked out early in Doha and Lausanne. But they are bolstered by the key addition of Robbie Hummel, who has not played on the World Tour this year and the World Cup 2019 MVP could be the missing ingredient for the struggling Americans.

Princeton aren't the only Americans in the group with Omaha 3BALL (USA) making their debut and all eyes will be on the dynamic Dylan Travis, who is set to make a splash on the big stage.

They qualified having won the 3x3 national championship in the USA in an eye-catching performance against NY Harlem in the final.

Last but not least, Antwerp (BEL) have been a revelation on the pro circuit in 2021 (3 Challengers titles!) but fell back to earth with a heart-breaking one-point quarter-final loss to Amsterdam Talent&Pro in Debrecen.

Their emergence as a rising force, however, has been confirmed with the Belgians seeded fourth in Montreal as they head a tricky Pool D, which also features Nanjing Masters 2019 champs Edmonton (CAN) and a new-look Manila Chooks TM (PHI).

Antwerp's confidence was shaken slightly in Debrecen with new star Thibaut Vervoort aka 'Must See TV' needing a repair for his antenna after cold shooting in Hungary.

But you just know he'll be back firing as Antwerp return to full-strength with Olympian Rafael Bogaerts back in the fold.

They will need to be at their best in a tough start to day one, particularly against an emotional Edmonton who will be hoping to send off star Steve Sir - the World Tour shoot-out contest's all-time record holder - on a high.

Continuing the jam-packed Masters action, the fourth event of the season might just be the craziest one in store as the World Tour makes its exciting return to North America.