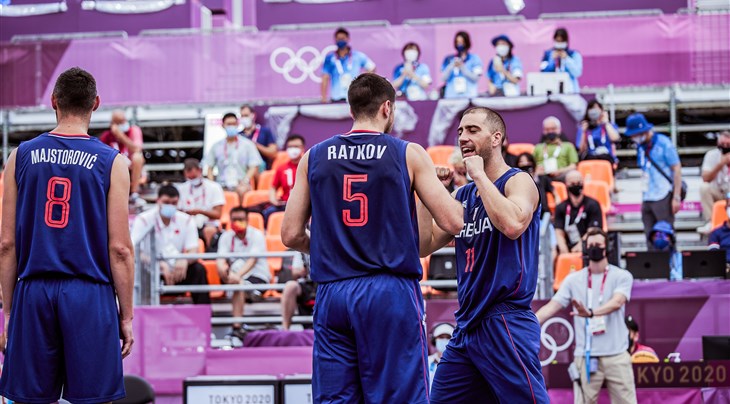 Bulut aka 'Mr Bullutproof' was unstoppable with a game-high 13 points - the second time in four games he has tallied double figures - to ensure Serbia remain in the box seat to clinch an automatic berth in the semi-finals, which is rewarded to the top two teams in the pool stage.

The No.1 seed were incredibly the only unbeaten men's team on a dramatic day one and they stretched their winning streak with a tough comeback win over Poland earlier on day one.

In-form Belgium, who were the last team to book a ticket to Tokyo, have been the surprise packet in 3x3 this year and came into the clash with a 2-1 record having earlier on day two beaten Russian Olympic Committee in a physical clash.

But after a bright start they could not stop the one-man Bulut show.

Vasic pulls out the tricks

Bulut, who has started his past two games slowly, went off the glass in pretty fashion but Serbia were made to work for baskets and found themselves in foul trouble.

It was big man Mihailo Vasic -and not Bulut - who made the highlight dime with a slick behind the back pass to Aleksandar Ratkov. But little separated the teams at the halfway mark.

Not often is Bulut made to look foolish but he did when his sure layup was emphatically rejected by Rafael Bogaerts as Belgium would not let Serbia get into a groove.

Bulut really found his groove when he splashed a two from the logo then delivered a sweet dish to Vasic to give Serbia a handy 15-11 lead. He finished the job in style with a two-piece.

Bulut shrugged off a quiet game against Poland with a masterclass nailing 7-of-10 from the field, including a trio of twos. He's sent an ominous warning to the field.