Ranking the pools at the FIBA 3x3 Olympic Qualifying Tournament 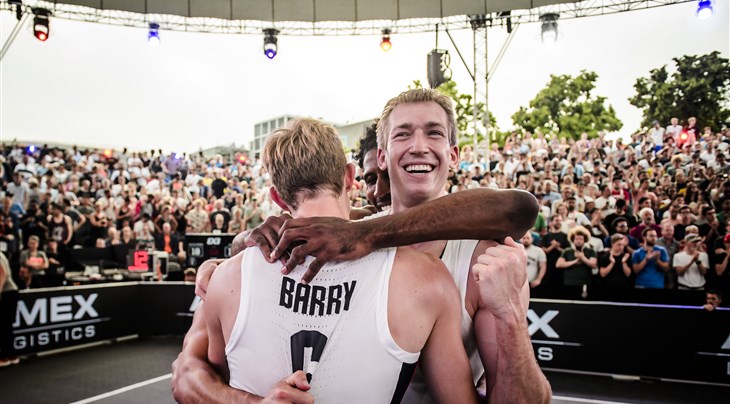 GRAZ (Austria) – Lifelong dreams are on the line at the FIBA 3x3 Olympic Qualifying Tournament on May 26-30, where tickets to Tokyo will be harder to win than a fight against Canelo.

There are 40 teams – 20 each for men's and women's – fighting for six spots to the Tokyo Olympics. I don't think we're ready for the drama. With the schedule announced, let's rank the difficulty of the eight pools across both genders in Austria and the games to focus on within the groups.

There is always one and this just has to be the Group of Death. All eyes will be on young sensation Satou Sabally, who is hoping to lead underdog Germany past world No.1 France and hoops power USA in must-watch games.

With KG's famous words ringing in her ears, anything is possible for the insanely talented 23-year-old unicorn who just might be able to inspire major upsets.

She's one of the brightest stars in women's basketball, fresh off a killer rookie season in the Euroleague Women, and will be well familiar with USA's star studded line-up but 3x3 is of course a different ball game.

The experienced France, who were unstoppable in the Women's Series 2019, deserve to be favorites boasting some of the best-ever players the 21-point game has ever seen. Migna Toure and Laetitia Guapo might be the best female duo since Brandy & Monica.

Their games against USA and Germany will be lit. But just when you thought it's only a three-horse race, Uruguay and Indonesia also can't be totally discounted.

It's the Group of Death, after all.

This group is deeper than a Drake lyric. All these teams are realistically in contention but the games to really monitor are Netherlands-Latvia and Netherlands-Canada.

It's no surprised that Latvia are one of the hot favorites to go to Tokyo considering World Tour power Riga essentially double as the national team. Superhero duo Karlis Lasmanis and Nauris Miezis thrive when the Bat Signal is on and the lights will be brightest in Austria.

But the Netherlands might be able to stop them with Amsterdam having started 2021 on fire with a triumph at the Doha Masters, including a thrilling 18-17 victory over Riga.

Of course, the Dutch Masters won't have Serb star Maksim Kovacevic who has been the recruit of the season but Doha MVP Arvin Slagter proved he slaughters opponents.

Assuming Latvia prevails – which is admittedly a dangerous assumption – the Netherlands and the dangerous Canada - featuring World Tour shooting contest record holder Steve Sir - will probably be competing for second.

I'm looking at hosts Austria and I see they've been on fire to start 2021 and beat Latvia at the Europe Cup two years ago. Not to mention hoops power Croatia...

You could have made a case for each one of these five teams to make it to the quarter-finals. Three of them will be out in the pools.

USA and Lithuania should dominate this pool and their matchup with be one of the highlights of the group stage.

Can you imagine the USA not being at the Olympics in hoops? It's hard to believe but there are no guarantees in 3x3.

After underachieving at the international level, the USA memorably broke through at the FIBA 3x3 World Cup 2019 where Robbie Hummel proved he could rival anyone in 3x3.

They also have World Tour stars Dominique Jones and Kareem Maddox – along with Canyon Barry, who is the son of NBA legend Rick Barry – but Europe Cup 2019 bronze medalist Lithuania won't be intimidated and are also stacked with talent from Sakiai and Utena Uniclub, who have quickly proven to be elite World Tour teams.

USA and Lithuania have had many epic basketball games on the big stage and now it's their turn to repeat the dose in 3x3.

All eyes will be on European powers Spain and Italy – historical rivals who have repeatedly played each other. Italy won 3 of 5 contests in 2019 but little separates these teams who both have serious ambitions of reaching Tokyo.

A highlight of these contests is the duel between Italian playmaker Rae Lin D'Alie and Sandra Ygueravide, who both always bring it just a little but more when pitted against one another.

These Euro powerhouses might end up meeting again in the knockout stages, so an early statement could be vital.

This is a tricky group and hard to read but Mongolia and Poland are tipped to progress. Everyone's favorite underdog Mongolia have huge expectations with 3x3 the most popular team game in the Central Asian country, which is traditionally famous for combat sports.

There will be pressure on Mongolia, who have prepared more furiously than a Rocky Balboa workout and they face an early test of their resolve against World Cup 2019 bronze medalist Poland.

Poland superstar Michael Hicks was all money during a dazzling run in Amsterdam. Does he still have cash in the bank two years later?

Arch-rivals Australia and Japan should battle for supremacy of this group as they renew a rivalry that has dominated Asian 3x3.

Australia beat Japan at the Women's Series 2019 opener in Chengdu and prevailed in an overtime classic at the World Cup a few weeks later through a Tissot Buzzer Beater from Maddie Garrick.

The girls from Down Under have not played 3x3 since late 2019 but are currently training hard and are quietly confident of an assault in Austria. At their best, they are one of the very best 3x3 teams.

But so are No.4 ranked Japan led by walking bucket Mai Yamamoto, who was the hero at FIBA 3x3 U23 World Cup two years ago where the East Asian nation won their first world title in their basketball history.

This is simply a game not to miss.

This is a pretty even group making every game incredibly important. Slovenia have ageless magicians Gasper Ovnik and Simon Finzgar – where do you think Luka learned his moves? – who always ensure World Tour side Piran almost always make the quarter-finals.

But Slovenia face tough opposition in this unpredictable group, particularly against Europe Cup 2019 silver medalist France and the Philippines.

They can be hot and cold, but the Filipinos might just have the best player in the pool in Joshua Munzon, who starred late last year in his home country and then in Doha.

Can he propel his hoops mad country past the consistently reliable European teams?

Don't bet against him.

Last thing: the Qatari team has been training for the last few months with 3x3 icon Dusan Bulut. That alone should make the Dominican Republic and the rest of the pool nervous...

Consistent European teams the Netherlands and Hungary should be fighting for top billing in this group.

Led by the brilliant Bettonvil sisters, the Netherlands finished fourth on the Women's Series standings in 2019 and perhaps this year is their time to make the leap just like their men's counterparts.

World Cup 2019 runners-up Hungary will prove a litmus test having overcome the Dutch with a tight victory to spoil the party in Amsterdam.

Cyesha Goree starred back then and one would be brave to doubt her to repeat the dose with the stakes even higher.

These teams are both dark horses to make Tokyo but a strong start in the pool stage could fuel a magical run.

You didn't think we would finish before bringing up that Estonia finished 2nd at the European Games 2019 and Belarus reached the semi-finals of the latest edition of the Europe Cup back on the same year... Good luck Sri Lanka!