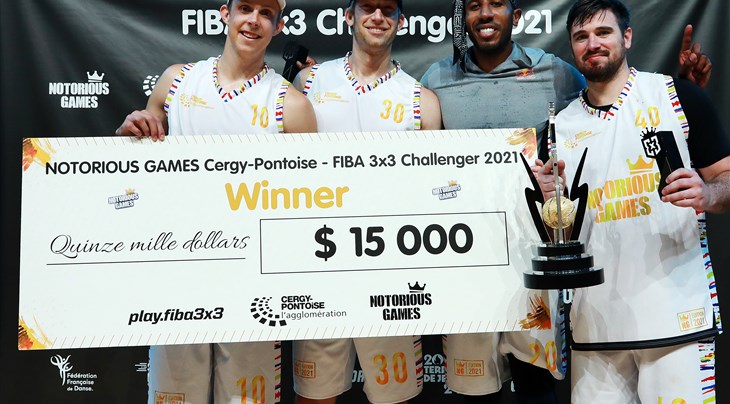 CERGY-PONTOISE (France) – After their stars fell short of their Olympic dreams and considered 3x3 retirement, Princeton (USA) sent a strong message that they're still a force to be reckon with by qualifying for the Montreal Masters with victory at the Notorious Games Cergy-Pontoise Challenger on July 10-11, 2021.

They were: No.1 in highlights and equal second in points per game

Much to the shock of the world, hoops power USA failed to qualify in Graz for the Olympics in a stunner that send shockwaves around the globe.

Shrugging off that disappointment, Robbie Hummel and Kareem Maddox were on a mission like they were in MI 7 and fueled Princeton to their first triumph of the pro season in Cergy-Pontoise.

It appeared more misery was headed their way after the No.3 seed got off to a slow start with an opening loss to 11th seed Raudondvaris Tauras (LTU). But they regrouped quickly and qualified out of the pool stage with a 22-14 beat down of Nantes (FRA).

Princeton, who were World Tour Final 2019 runner-ups, lifted a level in the knockout stages, which started when they overcame compatriots and No.1 seed NY Harlem (USA) 19-16 in an arm-wrestle. The dynamic duo of Hummel and Maddox were the difference with a combined 13 points.

In the semis, the Americans overcame the challenge from the always dangerous Lausanne Sport (SUI) 21-15 with Hummel shooting twos from the other side of the Atlantic.

In the final, Princeton won a rematch with Raudondvaris in a 21-19 thriller, where Canyon Barry - the son of NBA legend and underhand free throw extraordinaire Rick Barry - stepped up with a hot-shooting performance in a game-high 7 points.

Hummel, the World Cup 2019 MVP, who contemplated 3x3 retirement after Graz, reminded everyone that he is one of the best in the business with an MVP performance where he led the tournament in points (39) and player value (42.9).

The runner's up: Raudondvaris Tauras (LTU)

It was a fairy tale run for Lithuania's newest 3x3 sensation, who went all the way from the qualifying draw to within a basket of the title.

Having impressed in Poitiers with competitive performances against Ub (SRB) and compatriots Sakiai (LTU), it all clicked into gear in Cergy-Pontoise.

They made a statement against Princeton and then had an easy win over Nantes in the pool stage.

Then it got tough at the business end with Raudondvaris surviving a thriller in the quarters against Paris (FRA) with Sarunas Beniusis the hero with ice in his veins in the clutch.

The Lithuanians then poured cold water on red-hot Antwerp, who had more hype coming into the tournament than Black Widow. They won 19-16 in the semis before their magical run ended in heartbreaking fashion against Princeton.

Remember their names, these new 3x3 stars have arrived.

They even connect when they don't connect.

Raudondvaris were confident of a stunning first pro circuit title having defeated power Princeton on Day 1.

But the Americans know what it takes to win titles and they made a fast start with Craig Moore's wish for more buckets granted when his two-piece gave them an early lead.

Princeton showed why they are a World Tour power with a game-breaking 12-3 run capped by a pumped-up Robbie Hummel, who scored 5 points quicker than you can blink.

It looked a wrap until the Lithuanians had other ideas and flipped the game with a 6-1 run with Zygimantas Simonis going bang bang.

Under pressure, USA went inside to big man Kareem Maddox who had the better of the clash of the titans with Sarunas Beniusis and he rocked the rim twice with two-handed jams.

The courageous Raudondvaris wouldn't roll over and had one last run with Simonis nailing a two to cut the margin to 20-18.

But Canyon Barry, who was flawless from the field, showcased his fancy foot work to shake off defenders and hit the game-winner as Princeton won a heart-stopper 21-19.

The Americans finally have reason to celebrate.

Princeton and Raudondvaris Tauras join reigning World Tour Final champs Riga (LAT) and Ub (SRB) as the first teams to have qualified for the fourth Masters of the season on September 4-5.

- While No.11 seed Raudondvaris were the surprise packet, No.2 seed Ub failed to get out of Day 1 after a 21-13 thrashing to 10th seed Monaco Riviera (MON).

- Games in this tournament were faster than Snapchat with only three games going the full distance.

- Antwerp fell short of a three-peat of Challenger titles but their defense was stingy as they conceded just 16.3 points per game.