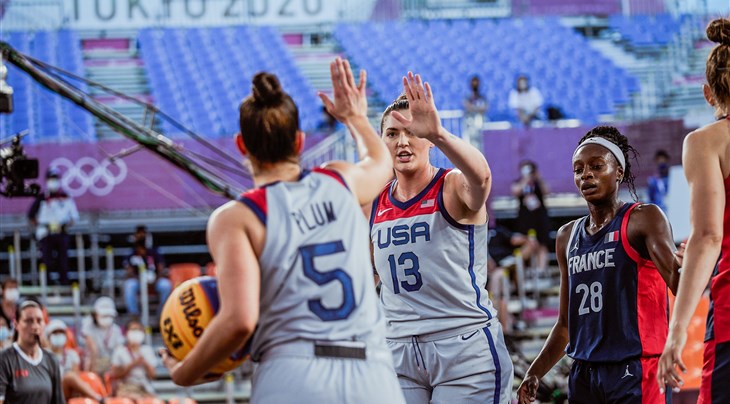 TOKYO (Japan) - 3x3's Olympics debut was well worth the wait. There were thrillers galore, clutch shots and a slew of spectacular moves in an unforgettable day one of the 3x3 Olympics competition at Aomi Urban Sports Park.

There were four games decided by just one point and only USA and Russian Olympic Committee (ROC) remain undefeated in the women's draw, while remarkably No.1 seed Serbia are the only men's team still with a perfect record.

Let's take a closer look at some of the standouts on day one.

Expect anyone else? 'Mr Bulutproof' wanted to show the world why he's considered 3x3's best and he did exactly that in his Olympics debut with a domination of China.

He scored 11 points and - of course - melted social media with a spectacular steal followed by a behind the back dime.

Bulut was well held next up against the Netherlands but turned it on late to ensure Serbia squeaked past the Dutch masters.

Part of the dynamic Frolkina sisters, it was Olga who stole the show as she topped the scoring charts on day one with 14 points.

The 23-year-old led a confident ROC to an opening victory over host Japan and then an easy win over World Cup champs China.

Even though they are the No.2 seed, ROC haven't been as highly rated as other contenders but the world took notice of them on day one, particularly the talents of the smooth moving Olga Frolkina.

Star-studded USA made a day one statement with perhaps the most impressive performance in their dismantling of No.1 seed France.

They then capped a perfect opening day with an easy win over Mongolia.

USA pulled out their WNBA weapons led by sharpshooter Allisha Gray, who brought the heat to Tokyo.

The towering Stefanie Dolson proved unstoppable in the paint as the USA confirmed why they are the team to beat.

All eyes were on the four-time World Cup winners and they did not disappoint. There had been concern over rustiness with Serbia not sighted since 2019 but they started fast with a demolition of China.

They were made to work harder against in-form Netherlands but Serbia would have been satisfied to get through that early test.

You can bet their chemistry will be even better on day two.

Latvia are one of the favorites to go all the way in Tokyo but they faced a tough task on day 1 against in-form Belgium, who have lit a fuse under 3x3 in 2021.

This hyped up game lived up to top billing with little separating the teams and predictably this instant classic went down to the wire.

A Nauris Miezis two-piece put Latvia on the brink at 20-19 before Thibaut Vervoort proved the hero with a buzzer beater for the ages as Belgium claimed a big scalp in the best game of the opening day.

The action starts at 10.15am local time with host Japan against Mongolia in the women's draw.

Some of the main games to keep an eye out for include Serbia vs Poland in a rematch from an epic FIBA 3x3 World Cup 2019 bronze medal game and unbeaten teams USA and Russian Olympic Committee clash in the women's.