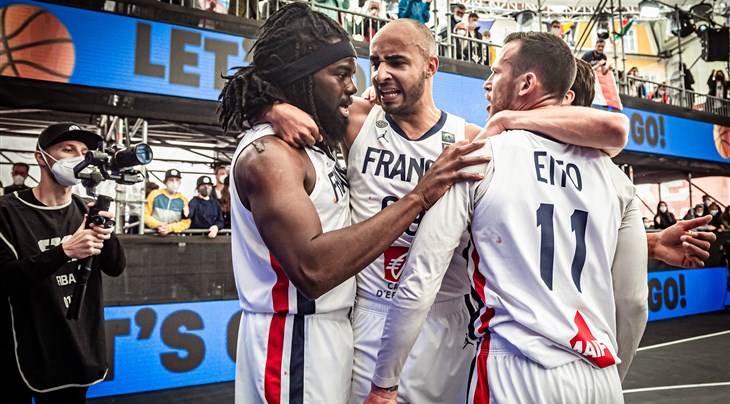 PARIS (France) - With two months to go before the FIBA 3x3 Europe Cup 2021, presented by the Caisse d'Epargne, the pools for the men's and women's categories are now set. From September 10 to 12, 4 pools of 3 teams will compete in each category.

As per FIBA regulations, the teams were allocated based on the FIBA 3x3 Federation Ranking, in this case on July 1, 201. Slovenia, winners in 2016 and 4th in the world, are the top seed in Pool B, which is also composed of Poland, who just qualified for the Olympics, and Estonia who will honor their 2nd participation.

France will need to bring their A-Game to take first place in Pool C. After a silver medal in 2019, Les Bleus will first have to face Lithuania (5th in the world and 3rd in 2019) and Austria (6th in 2019) before dreaming of a final victory.

Pool D will feature two teams who will compete at the Olympics: Russia (6th in the world) which have never yet reached the podium (4th in 2016 and 2018) and the Netherlands (7th in the world). Israel (43rd in the world) will be the underdogs in Paris after their nice performance during the Qualifier at home. France, double titleholder and number 1 in the world, will be the top team of Pool A. In Germany and Israel, they will meet 2 teams, who will make their debut at the Europe Cup in the women's category.

Russia (winner in 2014 and 2017) will face Ukraine who won bronze in 2018 and Great-Britain, who will make their debut in the competition for the first time in Pool B.

Romania (3rd in the rankings) will try to beat their best result, a second place in 2016. For this, they will have to battle within this Pool C against Hungary, the winners of the 2016 edition, and Belgium, 3rd in the first edition in 2014.

To complete this women's seeding, Pool D will be loaded with the Netherlands, 5th in the world, bronze medalists in 2017 and silver in 2018, but also Spain, who won silver in 2019, and Lithuania (77th world), who caught our eye in the Europe Cup Qualifier.

The full schedule will be announced at a later stage.