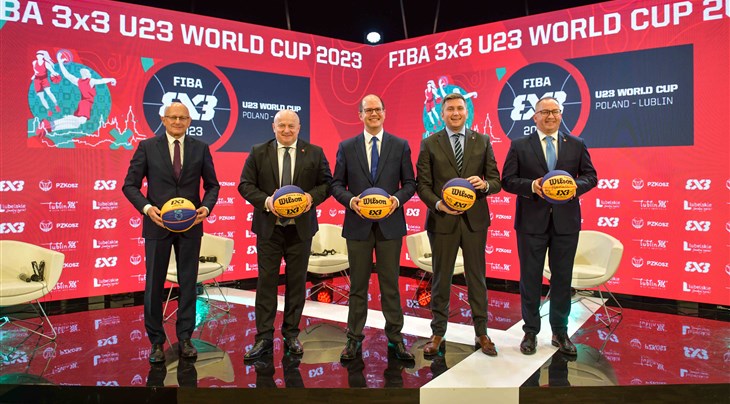 LUBLIN (Poland) - The fourth edition of the FIBA 3x3 U23 World Cup will be staged in Lublin, Poland in 2023, FIBA and the Polish Basketball Federation (PZKosz) announced at a press conference on December 16, 2021.

“It is a very important day for FIBA, Polish basketball, the region and the city,” FIBA Secretary General Andreas Zagklis said. “It is a great pleasure for us to once again cooperate with an experienced partner like PZKosz on such a large event. Seven of our Tokyo 2020 Olympic medalists shined at this event in the past. This is where the people of Lublin and the fans worldwide will discover the men and women’s stars of tomorrow”

“3x3 basketball is becoming more and more popular in Poland,” PZKosz President Radosław Piesiewicz said. “We have already had the first great successes and ideas for development, which we will implement in the coming season. New female and male players are added to the national teams - at various levels. Now is the time for the next step, which is the organization of an international event of the highest rank. I am convinced that the U23 World Cup will be an additional impulse to increase interest in 3x3 basketball. We are also counting on the effective victories of our teams.”

The fourth edition of the FIBA 3x3 U23 World Cup will take place in Lublin while the city is the European Youth Capital. The U23 World Cup is a yearly competition, and the third edition will be organized in 2022 at a location to be confirmed. Japan’s women and Russia’s men are the defending champions.