One question for each 3x3 women’s team at Tokyo Olympics 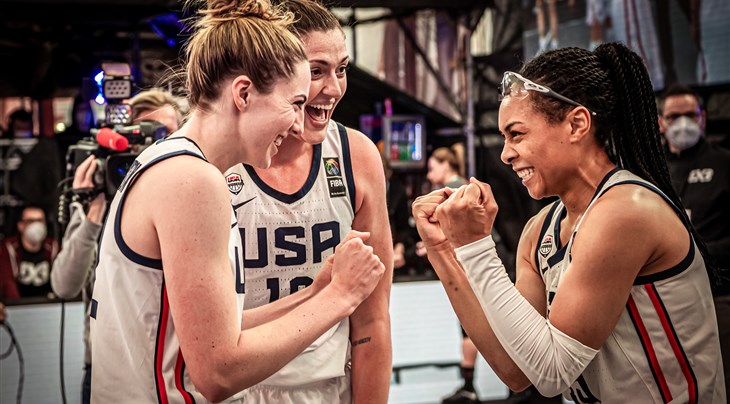 TOKYO (Japan) – Forget Black Widow, the hype is in overdrive for the women's 3x3 Olympics competition.

Ahead of the moment of truth, let's try to answer a curly question for each of the eight teams in Tokyo.

Will ROC find the right combination?

Is there such a thing as too much talent? ROC certainly is well stocked with their senior and U25 teams doing well recently in the Women's Series.

The senior team finished runners-up to host France in Poitiers with Mariia Cherepanova and Anastasiia Logunova absolutely dominant. But the U-25 team actually knocked off their countrywomen in the quarter-finals in Voiron with the insanely talented Frolkina sisters starring.

ROC have named a deep seven-player squad for a preparation camp in Vladivostok ahead of the Olympics.

Having so many options is a welcome headache but ROC's selectors will still be feeling pressure to to nail the right combination.

Does a shorthanded China have enough?

The injury bug has bitten the FIBA 3x3 World Cup 2019 champions with only the towering Zhang Zhiting remaining from China's memorable triumph.

They've lost stars Wu Di and World Cup MVP Jiang Jia Yin to surgeries increasing the burden on 6ft 5in (1.96m) Zhiting, who was the fourth leading scorer in Amsterdam.

Other teams may have almost no chance to recover but China fortunately has a lot of talent.

You feel Zhiting will need to dominate the paint for China to go all the way but they have x-factor youngsters Jiyuan Wan and Yang Shuyu, who are talented teens already with a wealth of international experience at junior level.

They are shorthanded but China still remain a team to beat in Tokyo.

The women's team will create history in Tokyo being the first from their country to qualify in a team event at the Olympics with the East Asian country traditionally known for excelling in combat sports.

These real life Wonder Women have already become heroes back home with star Khulan Onolbaatar selected to become the flag-bearer for Mongolia in Tokyo, the first-ever woman to get this honor.

The 5ft11in (1.80m) marvel can make dreams come true having starred in the FIBA 3x3 U23 World Cup 2019 highlighted by a memorable buzzer-beater against Germany.

Mongolia announced themselves back then with a quarter-final finish and there is quiet confidence within the group that they can do some real damage in Tokyo.

With three million fans behind their every move, an inspired Mongolia might just be able to pull off one of the most remarkable success stories in sports.

Is Romania peaking at the right time?

Romania hasn't won an international medal in five years but that drought might be ending at the best possible time.

The No.3 seed head to Tokyo as one of the favorites having impressed with third-place finishes in the Women's Series in Voiron and most recently in Poitiers.

Gabriela Marginean and Sonia Ursu have long been the headline act for this history-making team, who are the first women's hoops team from Romania to qualify for the Olympics.

And they are making noise again on the 3x3 scene at the right time.

Can USA handle the expectations?

3x3 red, white and blue pride rests with the women after the men went down at the Olympic Qualifying Tournament.

USA are always expected to win gold in hoops, so it will be intriguing to see how this star-studded women's team handle the pressure.

They did just fine in Graz where USA blitzed through the field with a perfect record, including a tight 21-17 victory over world No.1 France.

The team showed in Austria that - despite being relatively new to 3x3 - they had done their homework, had great roster construction and were ready to give their everything on the court.

It remains to be seen though if the weight of being the USA's sole hope in 3x3 will weigh them down when the stakes are highest. All signs point to them being able to handle the expectations.

Will Ana-Maria Filip be the difference maker for France?

It was mission accomplished for France in Graz as they booked a ticket to Tokyo. They did what they had to but a little bit of the world No.1's aura had worn off.

Hungry teams did not seem to be afraid of Les Bleues, who won 6 of 9 titles in Women's Series 2019 and have a one-two punch of Laetitia Guapo and Migna Touré that is stronger than cognac.

They lost their blockbuster opener against USA and only beat Hungary and Japan by one point each. France may have lost a bit of their intimidation but the return of FIBA 3x3 Europe Cup 2019 MVP Ana-Marie Filip might just provide a pep in the step.

They’ll need all their weapons firing to get through such a tough field.

Can Japan make the most out of home court advantage?

Unfortunately for the host they won't have their passionate fans cheering them on from the stands. But they should still feel more comfortable than the rest being at home.

Unlike the men, Japan's women had to do it the hard way and qualify for the Olympics via Graz and they did so in style with a thrilling victory over Spain in the last game.

Tournament MVP Stephanie Mawuli was colder than Mt Fuji and well supported by Mai Yamamoto who is small in stature but tougher than a sumo wrestler.

Japan has an unchanged team from Graz and there is good vibes around them. The East Asian country has quickly embraced 3x3, where they won their first-ever world title in basketball (with Mawuli and Yamamoto at the FIBA 3x3 U23 World Cup 2019).

They won't have cheering in the background to spur them on but Japan should still have an edge playing on home soil.

The 2018 World Cup champions had an agonizing qualification but secured the last ticket to Tokyo with a gritty victory over host Hungary in Debrecen.

Move over Scarlett Johansson, Raelin D'Alie is the real action star and the hero – expect anyone else? – in Debrecen. There is probably no more deserving player to have her Olympic dreams fulfilled than this 3x3 favorite.

D’Alie has a big heart and her passion inspired Italy to overcome the obstacles during qualification. Will it be enough?

If she needs any more inspiration she can look at Italy's football team who defeated host England in a thrilling Euro 2020 final, while young tennis star Matteo Berrettini stormed to his first Grand Slam final at Wimbledon.

As the old saying goes, all good things happen in threes.

Maybe it's the summer of the Azzurri.