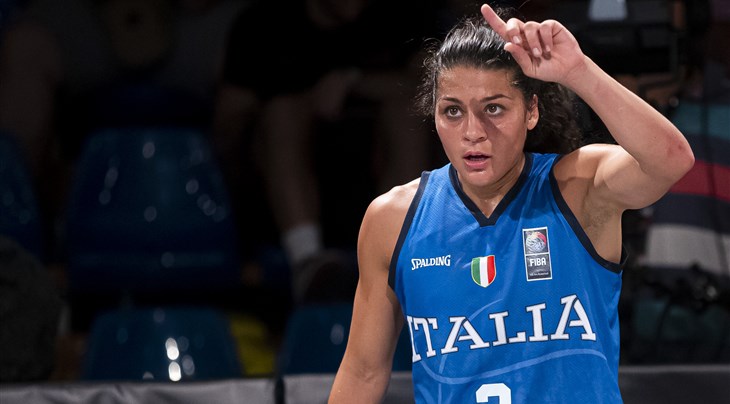 GRAZ (Austria) – The moment of truth is fast approaching for the 20 women's teams competing at the FIBA 3x3 Olympic Qualifying Tournament on May 26-30.

As we anticipate 3x3's big moment, we ask one burning question for all the teams chasing the coveted three tickets on offer to Tokyo.

Can France dominate without Filip?

France is the world's No.1 for good reason - a ranking they deserve after winning 6 of 9 Women's Series 2019 and boasting the top three ranked players in the world in Laetitia Guapo, Migna Touré and Ana Maria Filip.

But in Austria, they will be without Filip, who had an injury-plagued season.

In the ultra competitive and unpredictable 3x3, there are no guarantees but France still should be firmly in the mix for a ticket to Tokyo. They still have Guapo, Touré and 3x3's best-kept secret Marie-Eve Paget but they probably aren't the clear cut favorite anymore.

Will the pressure be too much?

Representing the red, white and blue in hoops can be a curse. They're expected to win and if they don't then it’s seen as a bigger failure than Shaq's acting career.

There's good reason why. No country has the sheer talent that USA is blessed with and the team they are sending to Austria is no different. Katie Lou Samuelson, Stefanie Dolson, Allisha Gray and Kelsey Plum brim with WNBA talent and experience.

But coping with the enormous expectations that accompanies representing the hoops superpower will be a challenge.

Can Satou Sabally be the best player in the tournament?

For Germany's Olympic dreams to materialize, they need to basically get past either France or USA. That's extremely difficult but not impossible when Satou Sabally is leading the charge.

The 23-year-old is one of the most talented players in the world and a young sensation having impressed both in the Euroleague Women and the WNBA. The unicorn has become more than an athlete for social justice advocacy and Austria might well be her coming out party on the world stage.

If Germany does leave Graz with a ticket to Tokyo then Sabally would have surely been the player of the tournament.

Can Uruguay shock the world?

It's essentially a three-horse race in Pool A aka the Group of Death. The 15th seed Uruguay have unluckily been placed in such a difficult pool and it's highly unlikely they can get into the knockout phase.

But don't expect the South Americans to be like rabbits in the headlights. They've been there before. Both Florencia Somma and Victoria Pereyra were playing 3x3 when the entire US team was still in college. They represented Uruguay in the second FIBA 3x3 World Cup of all time back in 2014 in Moscow, Russia.

Can Kahol dominate in the senior category as well?

We also thought Indonesia had no chance back in 2017 at the FIBA 3x3 U18 Asia Cup. And then Lea Kahol put her country on her back, won MVP and the continental title after beating China in the process. Now Kahol has moved up to the senior category and she's not afraid of anybody. No matter how many 3x3 titles or WNBA games you've played.

Can Iran be a giant-killer again?

Iran provided one of the upsets of the FIBA 3x3 World Cup 2019 with a thrilling 19-18 victory over No.2 seed Mongolia. It was their only victory in Amsterdam but proved to be a momentous triumph for a team of pioneers whose success has important ramifications in Iran.

The No.4 ranked team in Asia will have a tough time in a Pool B headlined by Japan and Australia but never count out these warriors.

Will Japan secure a dream of a lifetime?

The Olympics is a dream for all athletes but imagine competing at a home Games? Japan has even more on the line knowing they can secure the opportunity of a lifetime by playing on home soil at the Tokyo Olympics.

The No.4 ranked team in the world will feel confident they can truly achieve their dreams because they've done it before at the U/23 World Cup 2019 thanks largely to Mai Yamamoto, who will be their main hope in Graz if she makes the final roster.

Will size be Ukraine's x-factor?

Underdog Ukraine will be hoping that size matters – because they are taller than an Olympian high jumper. All four of their players are around 1.83m (6ft) and they will have notable size advantage over most of their rivals.

If Ukraine can effectively utilize their vaunted height then they will cause headaches for the fancied teams in Pool B.

Does Thailand have a lucky charm?

Thailand replaced Turkmenistan into the main draw but they won't just want to merely make up the numbers. And they have some experience on the big stage having competed in the Women's Series two years ago and winning silver at the South East Asian Games 2019.

They also impressively reached the quarters of the Asia Cup 2019. Maybe it's their destiny to do some damage in Austria.

Australia are one of the best teams in the world. The girls from Down Under competed twice on the Women's Series 2019 and won both times, while they finished fourth at the World Cup 2019.

If Bec Cole doesn't hit you, Maddie Garrick will. They won't be intimidated by anyone and believe their mental toughness can always get them over the line.

Due to being based so far away, Australia don't play often as highlighted by their rare appearances in 2019 and the Covid-19 pandemic has meant they haven't been seen since.

But there are whispers that they've been training harder than Creed and team members believe they are even better than when we last saw them.

Can the Netherlands make the leap?

You know what to expect from the Dutch - ultra competitive and consistent. But they have just fallen short of the absolute elite despite the continual brilliance of the Bettonvil sisters.

They made at least the semis in 4 of 7 stops in the Women's Series 2019 but frustratingly did not win a title.

For inspiration they can look at their men's counterparts who similarly fell short until a breakout Doha Masters by Team Amsterdam.

Estonia, the tiny Baltic country, were the surprise packets at the European Games two years ago after winning a silver medal and just falling short to France in the final.

Merike Anderson and Kadri-Ann Lass are expected to remain from that triumph and will have the belief that Estonia can perform an even bigger surprise in Austria.

Narallia Dashkevich and Maryna Ivashchanka both stand 1.90m (6ft 3in). They have a size advantage against most opponents and will be trusted upon to lead Belarus out of the group stage.

Belarus finished with bronze at a home European Games two years ago but won't have home support to fuel them on. They'll need their twin towers to get the job done.

If not, they can use their own anti-tower atomic weapon in Anastasiya Sushchyk (just wanted to show this clip for the 37th time):

The brilliant 27-year-old was a sensation at the World Cup two years ago to finish second leading scorer and inspire Hungary's remarkable silver medal in Amsterdam.

If Hungary are to earn a ticket to Tokyo, they need Goree to again be a walking bucket in Graz and there is no reason she can't be. If she dominates as expected, Hungary should be firmly in the mix.

Can Sri Lanka be competitive?

Sri Lanka does not have much background in hoops. It is a small island nation mostly obsessed with cricket but they've taken well to 3x3 - especially the women's team who have mainly been competitive in junior tournaments and the Asia Cup.

Few expect Sri Lanka to emerge from the group but don't be surprised to see them being ultra-competitive.

Raelin D'Alie may be barely taller than Kevin Hart but this Italian magician is one mean 3x3 baller. The World Cup 2018 MVP can do things with the ball that should not be humanly possible and when she's feeling it there's nothing you can do.

For good measure, she can also drop a nasty rhyme that would envy Eminem.

Italy is a 3x3 power but a firing Rae Rae probably gets them over the line for Tokyo.

Can they build on an impressive Asia Cup?

Chinese Taipei unluckily did not get into the main draw of Asia Cup 2019 after agonizingly falling short against regional power the Philippines in a thriller.

Yu-Chun Wei is expected to be the only player remaining from that resilient squad but if Chinese Taipei can play with similar passion then they might scare some higher rated opponents in Graz.

Can Switzerland build on the Women's Series success?

Switzerland have been on the rise in 2019 - firstly with an encouraging display at the World Cup where they beat Japan in a thriller then almost matching it with Australia.

In Montreal during the Women's Series 2019, the Swiss finished fourth.

To start 2021, the team beat former 3x3 World Champs Russia and finished 4th at the Women's Series in Mies.

Marielle Giroud proved she's still one of the best rebounders in the game and Evita Herminjard showed great signs of improvement as a creator. Both will be key in Switzerland making noise in neighboring Austria.

The 1.89m (6ft 2in) bucket getter was unguardable at the World Cup 2019, where she averaged a ridiculous 8 points per game to lead Spain to the quarters.

The No.7 ranked player in the world has all the tricks in the paint, where she scores at will.

Opponents better be ready otherwise Cuevas will be a one-woman wrecking ball inside. Do the hosts have the most?

As the 20th seed, Austria gaining a ticket to Tokyo would be crazier than a Kanye tweet.

But the comforts of home and support of fans - with Austria becoming an emerging 3x3 country - could fuel the greatest giant-killing run since Ramsay Bolton in Game of Thrones.