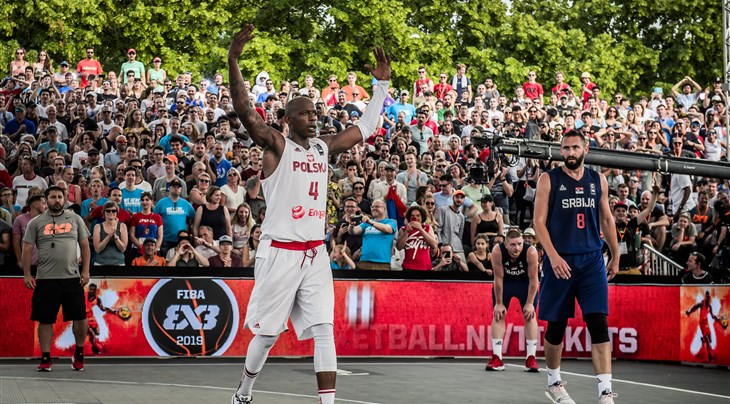 GRAZ (Austria) - There has been more hype than Mortal Kombat, but the FIBA 3x3 Olympic Qualifying Tournament is almost here with 3x3's fighters preparing for the moment of truth.

So let's ask a burning question for all 20 teams who are dreaming of securing one of the three tickets on offer to Tokyo.

Mongolia is the ultimate 3x3 nation. More than anyone else, the Central Asian country has gone from a basketball backwater to 3x3 power. It's arguably the biggest 3x3 success story and testament to FIBA's mission of spreading hoops to new frontiers.

It's a feel good story that might one day become the inspiration of a Steven Spielberg film but after seeing their women's national team qualified for the Olympics, they want more. The men's team is getting ready, climbing mountains to get into prime shape.

Mongolia have repeatedly proven they are four Ethan Hunts - they can complete Mission Impossible.

Don't write them off.

Will Hicks be money in the bank again?

It is simply one of the greatest 3x3 performances ever. Michael Hicks single-handedly demolished favored Serbia in the bronze medal game at the FIBA 3x3 World Cup 2019.

He had more cash than Leo DiCaprio in The Wolf of Wall Street to be all money when the game was on the line. But two years later, can he reproduce those heroics?

It is not yet sure if he will play in Graz but if he does, it would be brave to bet against this walking bucket getter who will need to keep his personal Fort Knox open a bit longer if Poland is to make a run.

Can Brazil lift on the big stage?

Brazil have bad memories of World Cup 2019 after a winless campaign. But it's not quite as bad as it sounds having been competitive against silver medalist Latvia and bronze medalist Poland.

Jefferson Socas and Jonatas Mello remain from that disappointment and should be motivated for redemption.

Can Turkey capitalize on their height?

Turkey emerging with a ticket to Tokyo would be a bigger upset than Happy Gilmore defeating Shooter McGavin after they were winless at World Cup 2019.

Even getting out of this tough pool will be an incredible accomplishment but Turkey have filled their lineup with size with all their players 1.96m (6ft 5in) and over.

Their size advantage against most opponents should give them hope of notching some victories.

Will the World Tour experience give the Czechs an edge?

The Czech Republic will be in a dogfight trying to get out of this group but several of their players have experience playing for World Tour team Humpolec.

Vladimir Sismilich and Roman Zachrla are reliable campaigners and shouldn't be overawed by this huge stage. Can Robbie Hummel be the best player in the world again?

Robbie Hummel was wet in Amsterdam two years ago as he led hoops power USA to a drought-breaking World Cup triumph.

The mighty red, white and blue of course dominate basketball but have found 3x3 more difficult until Hummel drained buckets easier than answering the first question on Who Wants To Be A Millionaire?

Hummel hasn't been seen since guiding Princeton to runners-up at the World Tour Final 2019, so it will be intriguing to see if he has any 3x3 rust.

Fortunately for him, he has plenty of help with the USA having more talent than the cast of The Irishman with Hummel joined by legit stars Kareem Maddox, Dominique Jones and Canyon Barry - son of NBA legend Rick Barry.

But if Hummel hasn't lost a step then USA is almost surely on their way to Tokyo.

Can Pukelis do it without his partner in crime?

Aurelijus Pukelis is a flat out 3x3 star and perfectly complements lethal lefty Marijus Uzupis in a killer one-two punch for Sakiai, who quickly became a 3x3 force. The duo led Lithuania to a bronze medal at the FIBA 3x3 Europe Cup 2019 but Pukelis will be without his uzi in Graz.

Lithuania should still be able to get out of the group but don't quite have the chemistry that has become a hallmark of Sakiai on the World Tour.

Pukelis will have a lot of burden in Graz and he will try to form a one-two much with his new Sakiai teammate Darius Tarvydas, who's a deadlier shooter than a Call of Duty gamer. Is Nick Celis ready to make a leap?

The 1.96m (6ft5in) Celis is Belgium's No.1 player and will be relied upon heavily by the underdog team, who appear on paper a fair way short of USA and Lithuania.

Celis has suited up for Antwerp on the World Tour and would surely be looking at this moment as a chance to show he belongs against the best. Can South Korea's continuity be a difference maker?

South Korea is one of the few teams with the same lineup from the World Cup two years ago.

That's particularly important for South Korea, who didn't make it out of the group stage but served it right up to Serbia and they also played the USA, which should serve them well in Graz.

They are a veteran group who should be composed in the stressful moments that will present in Austria.

Does Kazakhstan have a good omen?

Kazakhstan received a late inclusion after the withdrawal of New Zealand and maybe they already have that great intangible - luck.

But the Central Asian country is no pushover in 3x3 - Kazakhstan made the semis of the FIBA 3x3 Asia Cup 2019 in a major statement.

They might just do the same in Austria with luck perhaps on their side.

Can Slovenia's magicians produce their best trick yet?

For years, Simon Finzgar and Gasper Ovnik have schooled opponents in one of 3x3's greatest ever duos. Do they have one big run left in them?

With many teams rusty or developing chemistry, the special bond of 3x3's David Blaine-type double act might be able to hypnotize opponents on the grandest stage of them all.

Will Raphael Wilson be unstoppable again?

Raphael Wilson was one of the best players in the Europe Cup 2019 as he led No.9 seed France to the silver medal. The 1.96m (6ft 5in) dynamo moved and grooved around the court in a sublime performance that he hopes to replicate in Graz.

France always seem to find their best when the stakes are raised having also made the quarters at the World Cup 2019.

Some names have changed but Wilson is still there and France will feel like they are in good hands. Qatar has produced a 3x3 fairy tale before having won the World Cup 2014. They clearly have pedigree but need young guns Seydou Ndoye and Nedim Muslic to become a two-man wrecking ball to produce another global shock.

The towering Ndoye, who stands at 2.03m (6ft8in), can especially be a dangerous weapon down low if he can cope with the pressures of the big stage. He made Qatar the best team in the world in the U18 category in Astana, Kazakhstan in 2016. Can he do it again in the senior category?

Is a monsoon about to hit Graz?

Joshua Munzon is one of the hottest 3x3 talents in the world and he's getting better after a breakout stretch last year when he dominated at home and then in Doha.

The dude has more moves than Manny Pacquiao in the ring and now the confidence to match. The 26-year-old smooth mover seems to relish the pressure of hoops-mad Philippines, which can suffocate so many.

If Munzon makes another leap then the Philippines might just make a deep run and leave an entire nation in a frenzy.

Can the underdogs win a game or even more?

The Dominican Republic are the underdogs of the group and - on paper - it is tough to see them winning a game.

But 3x3 has proven crazier than Oscars voters not picking Chadwick Boseman for Best Actor, so the Caribbean nation will be a chance for some success.

Can Arvin Slagter's World Tour success transfer over to the national team?

It's been the year of the orange so far with Team Amsterdam breaking through in style to claim the Doha Masters. But only MVP Arvin Slagter from that victorious lineup will be in Graz.

The sharpshooter announced himself as an elite player in Doha and now will want to prove he is a genuine superstar on the international stage.

He won't have his title winning teammates in Graz but Slagter can rely on one of the best in the business - Dimeo van der Horst who is back after missing Doha due to injury.

Has Latvia's confidence been dented after early struggles in 2021?

Riga had maybe the most incredible stretch of 3x3 we've seen by taking out last year's Doha Masters and World Tour Final with the most astonishing Tissot Buzzer Beaters.

They appeared to be taking over from Novi Sad as 3x3's premier team but 2021 has not been quite as magical after their three-peat dreams in Doha ended at the semis and they've been patchy during the United Europe League in Russia.

A foot injury to superstar Karlis Lasmanis has also caused some worry but Latvia - consisting of the same players as Riga - remain adamant their supreme confident is intact.

When you have superheros Lasmanis and Nauris Miezis steering the ship, there's reason to feel good for the World Cup 2019 silver medalist who are hot favorite to get a ticket to Tokyo.

Will Steve Sir be shouting Yessiiir?

Steve Sir is one of the best shooters in the business. A fact confirmed by holding the World Tour's shoot-out contest record. When he's feeling it, Sir shouts 'yessirr' all game long and nobody can stop him.

The 1.96m (6ft 5in) star was sadly not seen on the tour last year and showed signs of rust in his return in Doha connecting on just 3 of 18 from deep as Edmonton fell in the pool stage.

For Canada to emerge out of this Group of Death, Sir has to be hollering.

Can Croatia emerge in 3x3?

Croatia is an iconic hoops country with much success at the Olympics having famously played the mighty USA Dream Team in the Gold medal game in 1992.

But the Balkan country hasn't quite emerged yet in 3x3 like their arch-rival Serbia but you feel it's only a matter of time.

It's a tough start in such a daunting group but maybe the time has come for Croatia to make a stand.

Is Austria the host with the most?

It's quite fitting such a big tournament is being played in Austria - an emerging 3x3 nation as showcased by Graz's highly impressive start on the World Tour.

It'll be the same players fighting for their Olympic dreams and Austria have advantages over everyone else - home support and being in the comfort of familiar surrounds.

As they've already proven, Austria will be a tough team for any opponent.