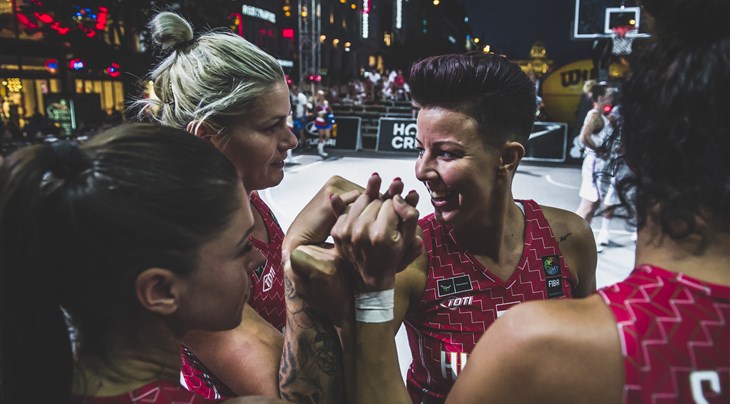 MIES (Switzerland) - After more than a year of waiting, the FIBA 3x3 Women’s Series is back!

Taking place May 15-16, it will be held at FIBA's Headquarters in Switzerland, the first time a FIBA official competition (3x3 or basketball combined) will happen there.

A total of 8 teams will play in Mies: Russia, Romania, Netherlands, Mongolia, Poland, Spain, Hungary, and Switzerland. For the first time, the players will compete for prize money ( $10,000 USD total).

The event predates the Olympic Qualifying Tournament taking place in just a couple of weeks, May 26-30 in Graz, Austria.

From this first Women’s Series field, Romania, Mongolia, and Russia have already qualified for the Olympics, while Spain, Netherlands, Hungary, and Switzerland are in the OQT.

In 2019, at the first edition of the Women’s Series, France were crowned champions after 15 events, followed in the standings by Canada and Italy.

In Mies, Russia will highlight Pool A, entering as the number one seed and welcoming back two familiar faces. Mariia Cherepanova returns following a 5-year absence from 3x3 after winning the Europe Cup in 2014 and the European Games in 2015. Tatiana Petrushina also makes her comeback. You may remember her from Russia's masterful double in 2017 (Europe Cup and World Cup titles). They are joined by Anna Leshkovtseva and Anastasiia Logunova, who have stockpiled trophies in 3x3 since 2014.

They will be joined by Mongolia, who already have their ticket for Tokyo as well and will mix up players from their senior and U23 team in Switzerland.

Poland were a success story 2 years ago at the Women's Series (6th overall), led by the step-back queen Aldona Morawiec.

And of course you should keep an eye on the hosts Switzerland, who have been a top 10 team in every big international competition for years (4th at the Europe Cup 2016 for instance) and have in Marielle Giroud, maybe the best rebounder in the game.

The field is also stacked in Pool B with Europe Cup 2019 runners-up Spain. Aitana Cuevas, the No. 9 ranked player in the world, dominated for Spain down low, scoring a 6th-best 172 points at the Women's Series. She is joined by the crafty Sandra Ygueravide and sharpshooter Vega Gimeno, who made headlines earlier this week for saying "she would be here even if 3x3 wasn't played at the Olympics."

The Netherlands also enter as a top contender, led by Jill Bettonvil, who finished 8th in P-VAL in 2019 (135.2). The 12th ranked player in the world is joined by her sister, Loyce, who ranks 17th.

It will be interesting to watch Romania, who are already in for Tokyo and will welcome US-born star Ashley Walker for the first time on the 3x3 roster. Of course we'll be here to watch 3x3 star Sonia Ursu as well. It's savage mentality but namaste vibes for the weekend.

Last but not least, the Mies event will be an opportunity to see the Hungarian national team again, who played so well in the last World Cup (2nd in 2019), Let's see if anyone can stop the Dora Medgyessy - Cyesha Goree pick-and-roll this time.

Finally, we're bringing the 3x3 game to the FIBA Twitch Channel as Dahlia Monteiro (gold medal winner at the U18 World Cup in the 2017 skills competition for Switzerland) will be the host for all the action!