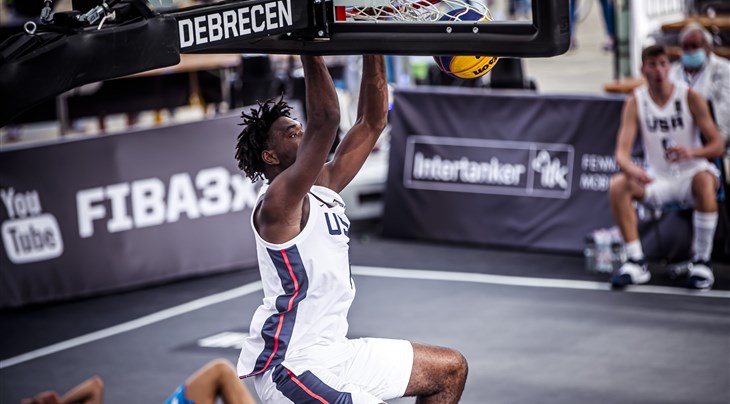 DEBRECEN (Hungary) – Day Two of this year’s FIBA 3x3 U18 World Cup saw the remainder of the competing teams take to the court to get their campaigns underway, and some of the competition favourites made big statements to get things going in Hungary.

It was the Europeans who showed out in the Women’s competition, as Spain, the Netherlands and Germany all impressed, whereas Lithuania and USA took the headlines in the Men’s competition, with plenty of other talking points as well.

Iris Vennema led a well-rounded Dutch team to a 2-0 start in Debrecen as the seventh seeds bested Romania in overtime and comfortably overcame the top seeds in the Women’s competition, Egypt, in a 16-8 win to round out their day’s action. They trail Spain in the group standings at this stage on points average, but besting the Egyptians means the Dutch take the day for us in the Women’s competition.

The impressive production line of talent coming out of Vilnius and Lithuania came together to put on another show in their first day of 3x3 U18 World Cup action today, as they topped two local rivals in their two fixtures. A dramatic comeback against Russia was emphatically sealed with a picture-esque poster from Mintautas Mockus in Lithuania’s opening game of the day, before they brushed aside hosts, Hungary, later in the evening. This team is very exciting, and we haven’t seen the best of them yet!

Whilst Latvia will have been disappointed not to win both games on their opening day of action, Ķīvīte should be very pleased with her own performances as she bagged 10 points off five two-pointers to power her nation to a big win against Israel, and notched another four points against Germany in a very tough fixture which the Latvians just fell short in. There’s plenty of sharpshooters in this competition, but Ķīvīte is up there with the best, and she proved that on her opening day of action. Man, this 6’3” dynamo can just do everything – he is explosive, relentless and utterly thrilling to watch! The Baylor University commit leads all Men’s scorers with 18 points from two games and was instrumental as the USA went unbeaten against Estonia and Slovenia on their opening day of action. There were big contributions from elsewhere on the USA roster, but this young man steals the headlines today for a very impressive side.

Jaka Oberlajt was instrumental as Slovenia secured a crazy comeback against 3x3 powerhouses, Latvia, in their opening fixture of the day’s action, and he sealed the W with a fadeaway jumper from the low-post that a certain Mr Luka Doncic himself should have and certainly seemed to be proud of!

Breylin Garcia made sure Dominican Republic were not to be denied in their first fixture of the U18 World Cup as he made this crazy rejection against Mongolia to ensure his side was well-placed to take their first win of the competition at the first time of asking.

❌Breylin Garcia with the huge REJECTION for the Dominican Republic in their #3x3U18 World Cup bow against Mongolia! pic.twitter.com/xmO3Eak10s