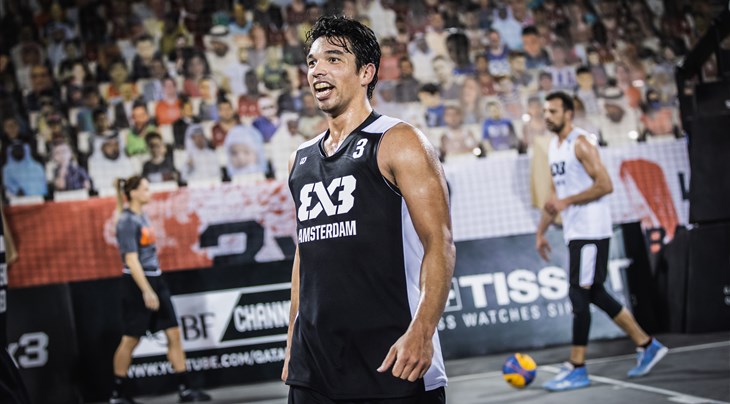 DOHA (Qatar) - The best in the 3x3 world were back for the start of the World Tour season in Doha, a familiar location for 3x3’s biggest stage. Let's look back at the players who outshined the rest with the most eye-catching stats of the Doha Masters.

We challenged someone from Amsterdam to step up and lead the team to the promised land and Arvin Slagter answered the call. It was a tag-team effort with Maksim Kovacevic who was also awesome, but Slagtar led the team in scoring in every game besides the final.

He was a killer from beyond the arc, hitting a tournament-high (12) 2-pointers, leading the field in shooting value and player value. Not bad for his third career World Tour event ever.

For all the hype around the additions of Dejan Majstorovic and Marko Savic, it was Ub’s returning star Strahinja Stojacic who was the most productive piece for the Serbians. He led his team in almost every statistical category and carried them into the bracket stage until they met Liman.

He led the field in points per game and player value per game, two great accomplishments, but difficult to replicate on a tournament-by-tournament basis. In fact, Ub is going to need to spread the love in the coming months if they are planning on winning their first Masters in 2021.

There are few players that go under the radar like Tamas Ivosev. After all of the news surrounding Novi Sad in the last month, his name has been left out of many conversations regarding the team’s future and how it would cope.

‘Frankenstein’ was again a monster in Doha, ripping down 28 rebounds, and contributing on the offensive end. He was tied for first with 3 Double-5s, shooting 68% from 1-point range and giving Novi Sad the inside presence that has made them so hard to beat for years. It's like he does it for the Gram. NY Harlem star Disco Domo put up a staggering 8 highlights vs. Princeton in the pool stage and finished with 16 total, the most at the Doha Masters.

NY Harlem would lose to eventual champions, Amsterdam, but it was another top showing from the former World Tour MVP and fan favorite.

After just one game, Liman, already down Stefan Stojacic before the event, lost their other star, Stefan Kojic to an ankle injury. But, even with three players, the Serbs were able to overcome and make it all the way to the semi-finals and a narrow loss to Amsterdam.

What made Mihailo Vasic’s effort so incredible was the proficiency in which he shot the ball. The number four player in the world made 19 of his 24 attempts from 1-point range and added a couple of 2-pointers and free throws to round out his top shooting day. He finished second in S-VAL and P-VAL per game, showing that Liman is all about the next man up mentality. The fastest games are usually during a lopsided contest where one team dominates from start to finish. But in Doha, we were treated to two awesome teams that were playing at the top of their games. Riga and Novi Sad shot a combined 59% from the field, giving Hawkeye a run for his money.

Novi Sad would come out on top, winning 21-16 with ‘Mr Bullutproof’ knocking down the game-winning 4-point play (you read that right!) in a true 3x3 GOAT moment. These dudes were just on another level.