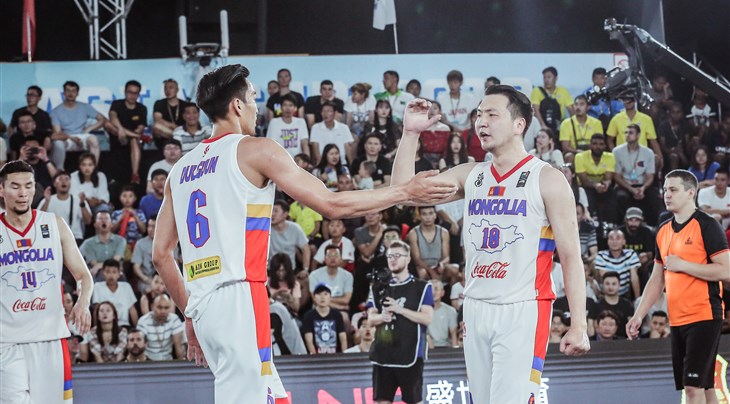 ULAANBAATAR (Mongolia) – It sounds like an episode of Survivor but Mongolia's 3x3 heroes are pushing the limits as they strive to achieve their Olympic dreams.

Not even Rocky Balboa trained this hard. But these warriors have the spirit of Genghis Khan as they attempt to make history for Mongolia, everyone's favorite 3x3 underdog.

Mongolia, the off-beat Central Asian country, has been one of the biggest success stories in 3x3 and perhaps are the best example of FIBA's mission of spreading hoops into new frontiers. Their men's and women's teams are both ranked in the top 10 in the world – an incredible feat for a country with just over three million people.

The women have already clinched their ticket to Tokyo, making it the first time in Mongolian history the country participates in a team sport at the Olympics. And now they have a shot at going to Japan with their two national teams. But to get one of the three tickets to Tokyo in the men's competition, Mongolia have to get through the tough Olympic Qualifying Tournament (OQT) in Austria next month.

They are pitted in Pool A alongside Brazil, Poland, Turkey and the Czech Republic.

Knowing the obstacles ahead, the players have been literally climbing mountains during an arduous training camp to prepare for the biggest tournament of their lives.

Their grueling schedule includes three two-hour daily practices starting from 5am and running up steep stairs in the picturesque mountainside north of Ulaanbaatar.

"We have a sports camp…1700 metres above sea level, which enables players to train in high altitude and have better fitness," team manager Myagmarjav Luvsandash said.

Renowned as playing a physical style of 3x3, through their sheer strength and mental toughness, Mongolia is set to be even stronger in Austria after such intense workouts.

They will certainly be unafraid having proven they are more than just a feel good story after winning the Asia Cup in 2017 and reaching the quarter-finals of the World Cup in 2018.

"I think they do have confidence with this tournament not being a first time meeting against top teams, but it is entirely up to them to show what they got mentally and physically," Luvsandash said.

Mongolia aren't just going to be a team of Schwarzeneggers in Graz, they have a lot of talent that is well known to fans of the FIBA 3x3 World Tour. Delgernyam Davaasambuu is a human flame thrower, while Dulguun Enkhbat has earned 100% approval for his sick handles.

But for Mongolia to shock the world in Austria, they know everyone must do their bit in 3x3 where no one can merely hide in the corner. "Everyone in the team should be a leader," Luvsandash said.

"On the court, one player is one third of a team - in the whole team a player represents a quarter of the role - thus everyone is important."

3x3 is the most popular team game in Mongolia, where the national players are something like rock stars. They could easily start a boy band although they are probably too rugged for that.

"3x3 is the most popular team game in Mongolia," Luvsandash said. "Every household, apartment blocks and houses have hoops outside. Kids play the whole day outside."

It has all meant that there is a lot of anticipation for Mongolia's performance in Austria. "Making the Olympics in a team sport, especially in Tokyo, would be historic achievement," Luvsandash said of Mongolia who first participated in the Olympics in 1964.

"Expectation is high and excitement is tremendous. We have got exactly a month to go. Cannot wait."

Be warned rivals, ain't no mountain high enough for this Mongolian team.