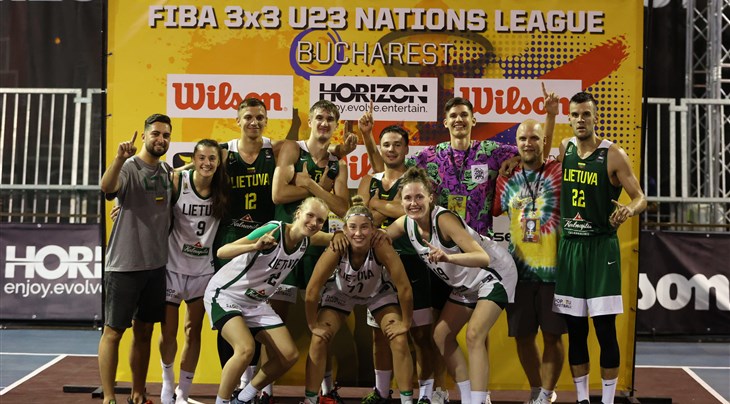 BUCHAREST (Romania) - Lithuania had double delight at the FIBA 3x3 U23 Nations League 2021 Europe Conference 2 with their men's and women's teams dominating the Bucharest stop to book spots at next month's decider.

Some of the best young talent in 3x3 have been on show across the continents in the fourth edition of this globe-trotting extravaganza. with the finale to be played in Bucharest again, this time on September 17-18.

Lithuania's men's were unstoppable during stops 4-6 played on August 20-22 with a clean sweep to comfortably sit on top of the standings ahead of second-placed Latvia.

Led by deadly duo Eimanatas Zilius and Ernestas Sederevicius, they cruised past host Romania 21-10 in the final of stop 4 before overcoming Latvia 21-17 in the decider of stop 5.

Lithuania's unbeaten run looked in major danger against a pumped-up Ukraine in the final of stop 6 but they hung on in a 21-20 thriller to win their fourth stop overall. Their dominance was highlighted by finishing top two at each of the six stops.

With Martyna Petrenaite and Livija Sakeviciute rampant, Lithuania's women were similarly dominant having won five of the six stops. They beat Latvia 21-14 in stop 4 and then repeated the dose albeit in closer fashion with a scoreline of 18-16 in stop 5.

But their stranglehold of the competition was finally broken by Ukraine, who prevailed 19-15 in the last stop.

The current situation is as follows: