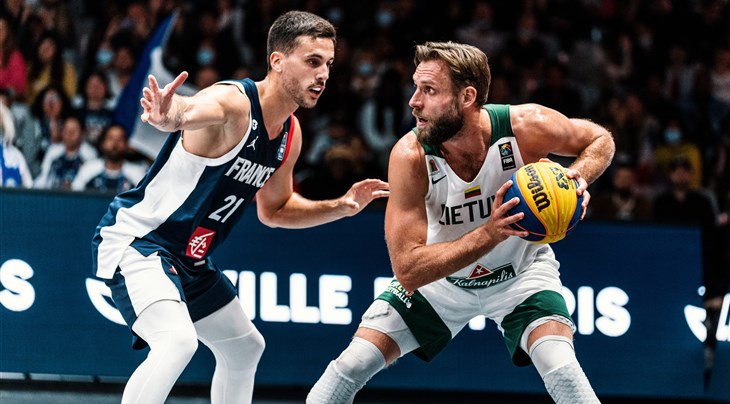 PARIS (France) – Day One of FIBA 3x3 Europe Cup action set the bar high for the rest of the weekend to follow, but the sequel certainly delivered in the French capital on September 11, 2021.

Olympic Silver medalists Russia, dominated in their opening day of action in the Women’s competition, overcoming Great Britain and Ukraine, whereas the Lithuania Men’s side lit up Paris with their energy on their way to two strong wins, and Women’s Pool D of Spain, Netherlands and Lithuania brought drama at every turn. Read on to find out more about Day Two’s action!

They barely missed a beat back in Tokyo as they cantered to a silver medal at the Olympics, and today as Russia made their 3x3 Europe Cup bow they were equally efficient on their way to booking a quarter-final slot against Lithuania on tomorrow’s final day of competition. They were made to work in both games against Great Britain and Ukraine, but Russia’s class and clinical edge showed out in the end as they bagged two vital wins and some momentum as they go for gold in Day Three. The Lithuanians upset the home crowd in their final game of Day Two, as they stopped a rallying French side in their tracks by coming from behind to secure an undefeated record on their first day of action. Ukraine await in the quarter-finals tomorrow, who will be buoyed themselves after beating the mighty Serbia, but Lithuania will be full of confidence as they chase glory.

When Special K comes to play, there’s more-or-less nothing anybody can do to stop her. She did everything she could to help Lithuania overcome the Netherlands, but Natalie van den Adel’s side just managed to prevent that, however an insane Tissot buzzer-beater against Spain ensured Nacickaite did steal the headlines and book her side a place in the quarter-finals against Russia.

He led his side excellently in front of a raucous home crowd on Day Two, and were it not for some steely Lithuanian determination he would have guided his French team to an undefeated Day Two of action. He’ll have to raise his game even more tomorrow, as Serbia await in the quarter-finals, but if the crowd bring the same energy – and with Serbia already having proven they can be beaten – don’t be surprised to see another France win. The French fans were never going to let their players give up on a play in this FIBA 3x3 Europe Cup, and they got their rewards for that incredible support with this insane play from Charly Pontens!

Hooked it over the Eiffel Tower!

Sandra Ygueravide was as incredible as ever in Day Two’s action, but this hook shot is the pick of the bunch from a number of great plays the number one 3x3 player in the world from Spain made!

They may be going home earlier than they’d hoped, but there were plenty of positives for Great Britain in their first major 3x3 competition, and Shanice Beckford-Norton’s energy was one of them. Check out how she tied the Ukrainians in knots in this crazy play!