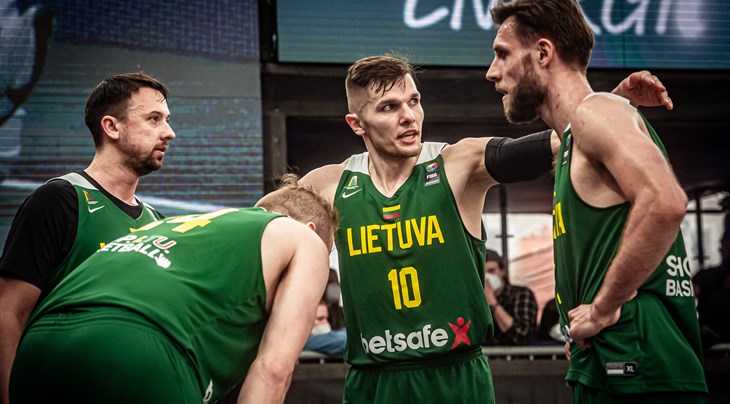 GRAZ (Austria) - 80 games are in the books and we have our quarterfinalists. The past four days have been some of the greatest in 3x3 history, showcasing the format on the world stage.

After our first 8 quarterfinalists were determined following Friday's action, 8 more teams (four men's and four women's) are joining them to complete the bracket.

Let’s take a closer look at the best of Day 4 of Olympic qualifying.

France (Women)
Migna Touré was not messing around on Day 4. She put up 19 points on the day as France defeated Germany and Indonesia to earn their spot in the quarterfinals. The number one team in the women's game is used to playing on the biggest stages and the rest of the field better be ready, because the best is yet to come.

🇫🇷 Proved today why they are among the favorites at the #3x3OQT pic.twitter.com/mhkN9ETQs3

Latvia (Men)
The chemistry is so real with these guys, we're putting them up for a Nobel Prize. There's not a weak link on this team, and there's no squad in the world that wants to face them in their current form. They head into the quarterfinals where they'll face Lithuania, a familiar foe.

Migna Touré (Women)
Touré came up big when they needed it most. Against Germany, in a must-win game, she dropped 11 points including (4) 2-pointers. It was a masterclass and what we've come to expect from the Women's Series 2019 MVP. With France in the quarterfinals, it's all gas, no breaks from here on out.

Joey King (Men)
He's been solid all Pool stage, but his biggest contribution came in a loss. With under a minute to go, in defeat, King scored the 16th point for the United States to clinch their spot in the quarterfinals. All tournament long, much like with NY Harlem, the man is one of the most dangerous players from any spot on the floor. He'll have a chance to keep showing out in tomorrow's most important games. Kelsey Plum has the ball on a string
Defenders beware: she's got more hesitation moves than the first time you asked your crush out.

Arvin Slagter sends the Netherlands into the bracket

One of the greatest game-winner you will ever see! The Netherlands needed the win to earn their spot in the quarterfinals and Arvin Slagter delivered.

This dutch is clutch!
🇳🇱 @3x3NL survives and will fight for a Olympic spot tomorrow 💪 #3x3OQT pic.twitter.com/5JgztvARj9

Indonesia defeats Uruguay (Women)
The Indonesian women only won one game at the 3x3 OQT, but they made it memorable. They defeated Uruguay 22-15, playing lockdown defense and spreading the love on the offensive end. Their win lit up Twitter, with the pride of the nation coming online to celebrate.

Belgium over USA (Men)
The assignment was clear. The Americans needed to score 16 points, win or lose, and they would make it to the quarterfinals. The Belgians came to spoil their party. Thibaut Vervoort put up 10 points in the win over the Americans, and despite missing out on a spot to advance (due to a tie-breaker), they impressed us all in Graz.