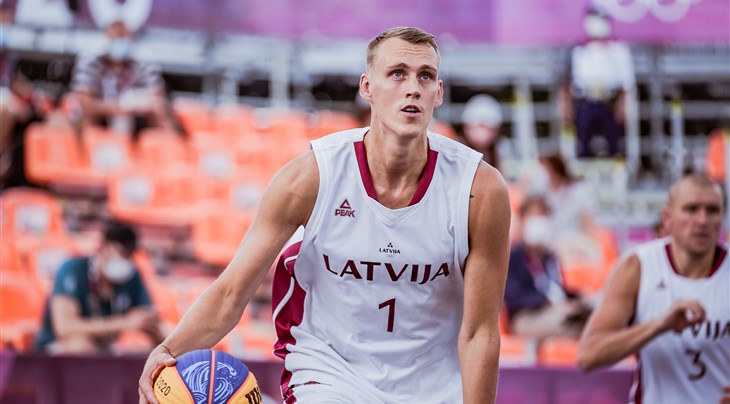 TOKYO (Japan) - Powerhouse Latvia thwarted Netherlands' bid for an automatic semi-final berth with a tense 22-18 victory in the final men's pool game on day four of the 3x3 Olympic competition.

Latvia finished with a 4-3 record to finish third in the pool stage behind unbeaten Serbia and Belgium, while Netherlands (4-3) missed their opportunity of a semi-final spot and will have to go through the quarter-finals to extend their Olympic run.

The No.3 seed controlled much of the blockbuster contest before holding off a late Dutch rally.

🇱🇻@basketbols see out a win against @3x3NL in the final pool game of #Tokyo2020 #3x3, giving them third place in the standings and a QF clash with @JBA3x3Official! pic.twitter.com/MtgwDUUEuF

Krumins gets a confidence boost

But he started confidently and nailed an early two much to the cheers of Latvia's contingent in the stands knowing the importance of a firing Krumins.

But Dimeo van der Horst erased Latvia's lead with a couple of twos in a fast and furious start.

In another reminder that he's no sidekick, Nauris Miezis restored Latvia's edge with a purple patch where he caught fire from deep then showed his driving abilities punctuated by a strong finish at the rim.

His partner in crime Karlis Lasmanis then gained control of the cape with a spectacular step back two while being fouled as Latvia gained control.

With victory in sight, Latvia suddenly got nervous and went through a dry spell as Netherlands launched an unlikely comeback.

But it was big man Agnis Cavars - so long the team's glue guy - who was calm under pressure and hit a two to seal Latvia's win.

Cavars, who is usually stationed close to the basket, hit a trio of two-pieces to be the difference in the contest.