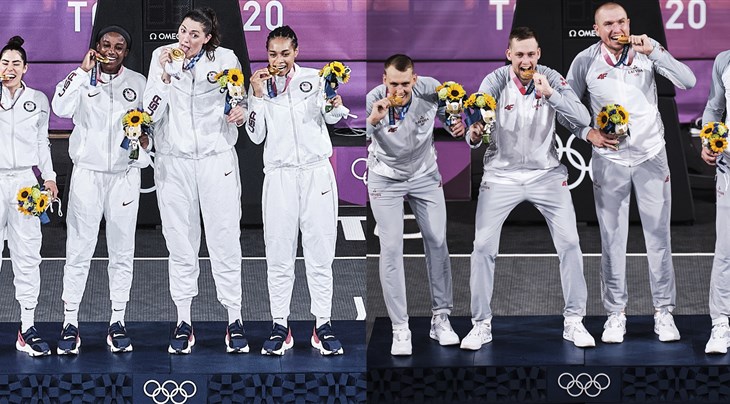 TOKYO (Japan) - Latvia superstar Karlis Lasmanis hit a shot for the ages and USA confirmed their credentials as the two teams became the first 3x3 Olympic gold medallists after a momentous finale at the Aomi Urban Sports Park in Tokyo on July 28, 2021.

Tournament top scorer Lasmanis sank a huge two from the left wing to cap his game-high 10 points as Latvia downed the Russian Olympic Committee (ROC) 21-18 in a thrilling gold medal game, while USA beat ROC 18-15 to triumph in the women's.

In the men's gold medal game, a confident ROC came out scorching hot from deep to gain the early edge before Latvia fought back through star duo Lasmanis and Nauris Miezis.

Fittingly, the last game of the tournament went to the wire with both teams going shot for shot and the drama heightened by Latvia sharpshooter Edgars Krumins hobbling off with an ankle injury.

Like he has done many times on the FIBA 3x3 World Tour, Lasmanis was the hero with a brilliant two to win gold for Latvia as he was mobbed on the court by his jubilant teammates.

ROC had been unfancied coming in despite being the No.2 seed and boasting a slew of young talent, who made a smooth transition from the U23 category, after winning the FIBA 3x3 U23 World Cup together in 2019.

ROC will be forever remembered for delivering the shock of the Olympics with a stunning 21-10 defeat of No.1 seed Serbia in the first men's semi-final, with their star shooter Alexander Zuev outscoring the entire Serbian team (11-10).

In the men's bronze medal game, Serbia regrouped with a convincing 21-10 victory over Belgium, whose fairy tale run ended after a spectacular rise in 3x3 this year.

Former number one 3x3 player in the world Dusan Bulut finished the Olympics on a high with 7 points, while Belgium sharpshooter Thibaut Vervoort - who had a remarkable trio of game-winning shots in the tournament - didn't have any heroics left but still led his team with 5 points.

In the women's final, where IOC President Thomas Bach was in attendance, a WNBA star-studded USA flexed their muscle and came out firing to overwhelm ROC, who staged a late rally but the Americans had all the answers.

Like she had all Olympics, the tournament joint top scorer Kelsey Plum aggressively drove to the rim to kick-start USA before the towering Stefanie Dolson took over to finish with 7 points and 9 rebounds.

Having scraped past France in a nail-biting semi-final, USA capped off a near flawless campaign with their only loss being against Japan in their final pool game having already locked up a semi-final berth.

ROC were gallant but just fell short on the 24th birthdays of star twins Olga and Evgeniia Frolkina.

Much like their men's counterparts, ROC, who easily beat China in the semis, were somewhat overshadowed coming into Tokyo even though this powerful team had three players who were part of a memorable triumph at the FIBA 3x3 U23 Nations League 2019.

In the bronze medal game, China became the first 3x3 Olympic medalist with a nail-biting 16-14 victory over France to spark memorable celebrations for the FIBA 3x3 World Cup 2019 champions.

The dynamic Lili Wang, who was the joint top scorer in Tokyo, was the difference with 9 points, while 3x3 star Migna Touré contributed 8 points for France.

The number one seed France, who has dominated the FIBA 3x3 Women's Series 2019 and 2021, failed just short of a podium finish.