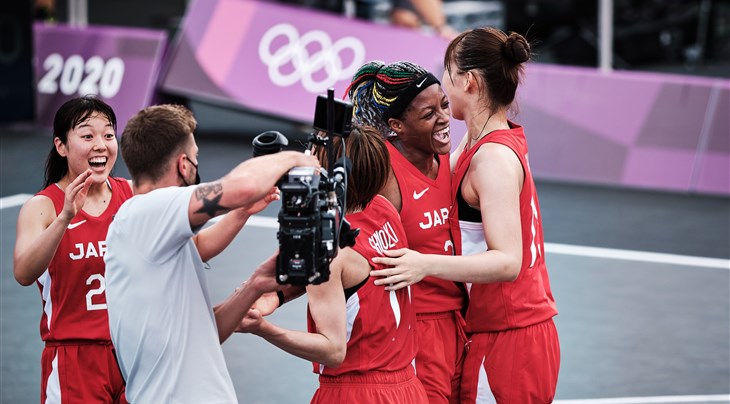 TOKYO (Japan) - Japan stunningly ended USA's 12-game winning streak and moved closer to a semi-final berth after a shock 20-18 win as the 3x3 action heated up on a pivotal day four on July 27, 2021.

With so much at stake, Japan overcame a slow start to notch a vital victory to move them to 5-2 and with still a chance of grabbing the second semi-final berth in the final stretch of pool play.

After a flawless opening three days, USA already booked their semi-final berth but their chance to cap a perfect 7-0 mark in the pool stage was undone after a big late-game rally courtesy of Japan.

USA were made to work on day three against Italy and China but they were all business to start day four.

Going down low to a reliable source in Stefanie Dolson proved wise for USA with the towering 1.95m (6ft 5in) player dominating inside for easy buckets.

USA jumped out to a 5-0 lead before Japan settled to claw back into the contest.

Yamamoto puts the foot down

21-year-old star Mai Yamamoto was being closely defended by the taller Jackie Young but her quickness still got her off the tight leash.

She showcased her explosiveness with a dazzling drive and layup as Japan drew level at the halfway mark.

Japan looked dead and buried trailing 14-9 but this team has a lot of heart led by Yamamoto who had a purple patch with an inside bucket and then a two as Japan snatched the lead.

It was a see-saw but Japan's tough defense overwhelmed USA, who had a shot clock violation in the dying stages capped by Kelsey Plum's two-point attempt to force overtime blocked by Stephanie Mawuli.

It might have been a dead rubber for them but the result shows that USA can be beaten.

"I'm really happy. We knew USA were strong but our team work is really good and we have confidence in that. I believe in it. The most important thing is that we enjoyed the game and we had the determination," said Japan star Stephanie Mawuli.

"I thought we played well. Japan are good. We will wait to see who we play and then we will lock in on that opponent. Every team is very different. We will need to play our best tomorrow and we are hopeful we can do that," said USA coach Kara Lawson.