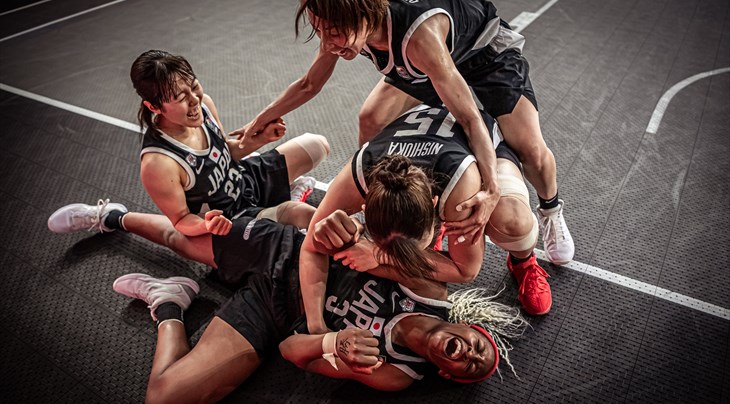 Japan Basketball announced on social media its men's and women's lineups with the rosters stacked with 3x3 stars.

Japan's men's team, who qualified automatically as host, boast a talented lineup highlighted by Japanese 3x3 pioneer Tomoya Ochiai, who has been part of the FIBA 3x3 World Tour since the beginning.

Ochiai, however, isn't just a blast from the past because this dude is still a samurai on the 3x3 court having helped lead 11th seed Aomi to a semi-final berth at the recent Lipik Challenger, where they shocked the world by defeating world No.1 Liman in a quarter-final overtime thriller.

Ochiai showcased why he's deadlier than sake when he nailed the game-winning two-piece to down Liman but their hero might have been walking bucket Ryuto Yasuoka, who tied the Serb's defense in knots.

The 26-year-old was unstoppable in Lipik and hopes to replicate that spectacular effort on the biggest stage in sports – the Tokyo Olympics.

The roster is rounded out by young gun Keisei Tominaga and Japanese basketball star Ira Brown, whose experience will be relied upon under the intense spotlight.

Rising star Tominaga, 20, is in hot demand and recently signed for Nebraska Cornhuskers of the Big Ten Conference. He might be young in age but Tominaga already showed his bag for Japan at the FIBA 3x3 U23 Nations League 2019.

It's a deep team looking to finish on the podium in front of their beloved fans just like their talented women's counterparts, who are similarly brimming with firepower.

Unlike the men's, Japan’s women’s team had to qualify for the Olympics and they did so in style with a thrilling victory over Spain in the last game in Graz.

Tournament MVP Stephanie Mawuli drained the Tissot Buzzer Beater to ensure Japan gets to be part of 3x3 history on home soil.

The athletic Mawuli leads a confident and stable Japan eyeing a medal in front of their passionate fans.

On the other end of the spectrum, Mai Yamamoto may be short in stature but her game looms large for opponents. She's a flat out winner having led Japan to the title at the U23 World Cup 2019 – the country's first ever hoops title.

Japan's Olympic team is unchanged from Graz and also boasts Risa Nishioka, who had a breakout at the U23 World Cup 2019, and the cat-quick Mio Shinozaki.

Already holding a sizeable advantage of playing at home, both Japan's teams will be extremely tough to beat.