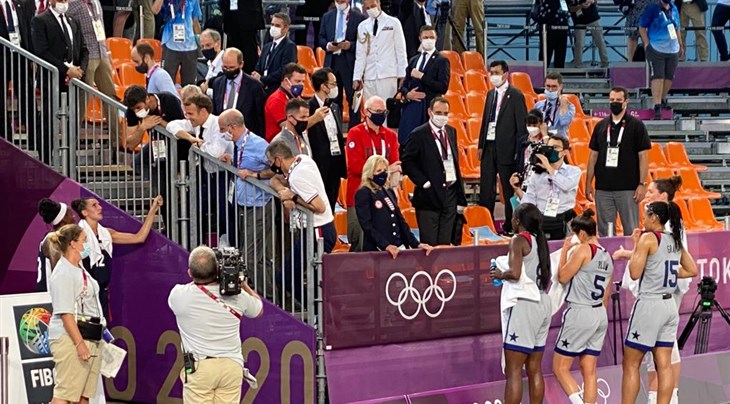 TOKYO (Japan) - It was one of the highlights of Day 1 for 3x3 at the Olympics on July 24, 2021: French President Emmanuel Macron and the First Lady of the United States Dr. Jill Biden in the bleachers of the 3x3 Olympic venue.

Not only were they celebrating every basket of the France-USA women’s game, they also addressed the players immediately after the games from the bleachers for long minutes, in what almost seemed like a flash interview. President Macron addressed the media after the games and spoke very highly of the new Olympic discipline: “It was the first time I saw 3x3 with my own eyes and I must say it’s amazing. […] It is quite impressive, physically speaking. It’s 10 minutes, nonstop with a form of self-management, that is stunning.”

Polish President Andrzej Duda liked 3x3 so much that he came in the morning to watch Poland-Latvia… and came back at 7pm to watch the team again beat Japan in a dramatic overtime.

The Head of State visits will continue on Day 2 with Mongolian Prime Minister Luvsannamsrain Oyun-Erdene in attendance as his women’s 3x3 national team became the first-ever Mongolian team to compete at the Olympics (the country had only participated in individual sports to this day).