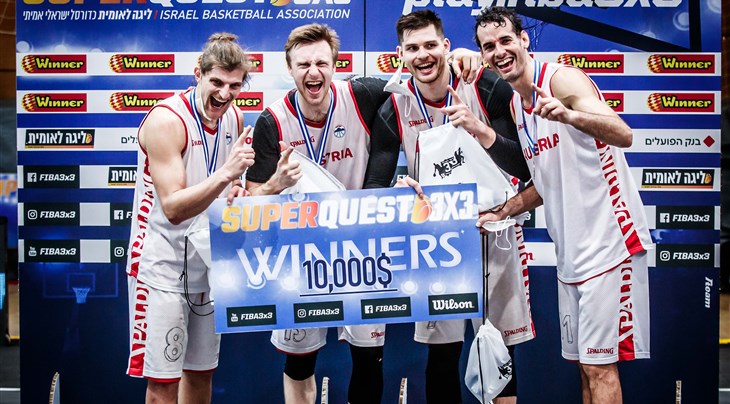 TEL AVIV (Israel) - Graz (AUT) tuned up for the Doha Masters with an impressive victory at the first ever Israel 3x3 Super Quest on March 18-19, 2021.

They were: No.1 in most points scored and highlights.

Move over Arnold Schwarzenegger, Graz has found a bunch of new heroes. These Austrian terminators are emerging as a rising 3x3 power after an impressive World Tour debut last year.

And they've seemingly improved this season in an ominous warning ahead of the World Tour opener in Doha. The No.2 seeds, however, were made to fight against Tel Aviv (ISR) in an entertaining semi-final, where they prevailed 21-17.

Graz were slight underdogs in the final against rampaging Gagarin (RUS), who had sizzled into the final like a Daniil Medvedev backhand.

The one-two punch of Fabricio Vay and Matthias Linortner proved irresistible as they combined for 67 points in the event.

Rivals be warned, Graz are the real deal.

Gagarin are well known on the World Tour but have never quite put it together. You can see why the Russians have been so highly rated after they stormed through to the final, where they beat down every local hope by double digits.

But, frustratingly, they couldn't deliver when it mattered most and fell short against Graz in the decider.

Alexander the Great: He's been one of the top young prospects for years, but Alexander Zuev might have legit arrived as a superstar. The 24-year-old proved why he is Russia's best 3x3 player with a tour de force in Israel, where he averaged an incredible 10 points per game.

Zuev had a monster 14-point tally against Yavne (ISR) and tallied double digit efforts in every game apart from the final, where his 6-point haul soured an otherwise tournament for the ages.

We can't wait until he next steps foot on a 3x3 court. The blockbuster clash between the top two seeds had more hype than Coming 2 America. In-form Gagarin were favorites after steamrolling into the final but they immediately found buckets much more difficult against the well-drilled Austrians.

It was a tense start with both teams showing signs of nerves before Zuev glided to the basket for a tough layup to edge Gagarin ahead.

But Graz went on a game-winning 10-2 run highlighted by the hot hand of Vay, who nailed a trio of two-pointers as the Austrians skipped out to a 13-6 lead.

Zuev couldn't get his outside game going but attempted a late rally with difficult buckets at the rim. Graz, however, were not shook and they calmly clinched victory at the free throw line through Moritz Lanegger.

Graz gained an important confidence boost ahead of the Doha Masters and walked away with $10,000 USD in prize money. Even though they didn't go all the way, Gagarin showed encouraging signs and also collected $5,000 USD.

Graz qualified for the main draw of a future Masters (exact Masters to be confirmed), while Gagarin will play in the qualifying draw of the same event.

Key Stats:
- Led by a red-hot Vorotizky, No.8 seed Kfar Blum was the surprise packet with a semi-final finish although they fell well short against Gagarin.
- Kfar Blum's classic 21-20 quarter-final victory over Kiryat Motzkin was the longest knockout game of the tournament (9'27" of playing time).
- Before falling short in the final, Gagarin had been more lethal than vodka and kept each of their opponents in single digits.
- Perhaps overshadowed by Vay and Linortner, Moritz Lanegger and Filip Kramer also played key roles in Graz's triumph with the former topping the highlights charts with 12 and the latter the overall leader in rebounds (27).