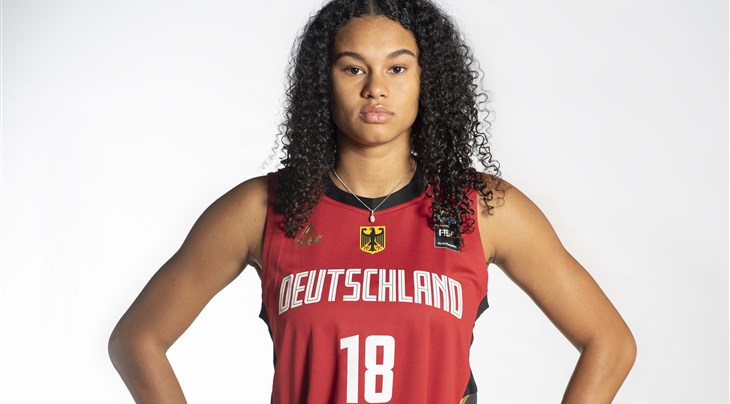 ISTANBUL (Turkey) - When she proudly represents Germany in 3x3, basketball young sensation Satou Sabally knows her fierce commitment to social justice and humanitarian causes will have a much deserved platform.

The Fenerbahce Oznur Kablo star in the Euroleague Women and Dallas Wings in the WNBA is far more than a hoops unicorn – the 23-year-old has become a vocal leader in the fight against racial injustice globally.

As a biracial – her father is from Gambia and mother is German – youngster in Germany, Sabally often felt like an outsider and those uncomfortable experiences fueled her to be much more than an athlete.

Sabally, who post-hoops wants to be in the profession of international law, has emerged in the WNBA as a leader and was the only rookie to be part of the league's Social Justice Council.

As she looks ahead to representing Germany at the upcoming Olympic Qualifying Tournament in Austria, Sabally understands the significance of wearing her national colors.

"It's very important to represent cultures in Germany that are not on the top of the list of society," Sabally said from Istanbul.

"There are little children who don't see a lot of people who look like me on this stage. It's great to have this outlet and to get attention over these important issues."

The 1.93m (6ft 4in) dynamo – who has basically a complete game – has not played 3x3 since the European Games 2019 in Minsk where she spearheaded underdog Germany to an impressive fourth place.

But she looms as one of the headline acts in Graz, where Germany is pitted in a tough Pool A – probably the 'Group of Death' – with hoops power USA and 3x3's top-ranked team France.

"There are aspects in 3x3 where people are really truly valued and there is a community behind it.

"Once we get to know each other, we share our struggles and stories. There is a wider world view formed. I think 3x3 is an amazing way to promote social justice."

3x3 takes great pride in gender equality in another major selling point for Sabally, who says 3x3 will be an "essential part of my life".

"With men's and women's events being held together, people are basically forced to watch the women's game and I love that," she said. "They get to see how swag, fast paced and athletic the women's game is.

"It changes a lot of minds and perceptions which I'm really happy about."

To ensure she's primed for Graz, Sabally has been undertaking individual workouts with a particular emphasis on ball-handling.

"I'll be having the ball a lot in my hands and I love that you can really hoop and offense comes around so quickly in 3x3," she said.

"I'm a really aggressive player and free-spirited, which is what 3x3 is all about so it's a really good fit.

"The hardest challenge last time was being able to react really quickly but I got used to that in one day."

Mature beyond her years, Sabally will be entrusted to be the leader of Germany who are looking to shock the world in Austria and emerge with one of only three tickets available to the Tokyo Olympics.

“I bring positivity and aggressiveness. I want to lead by example,” she said. "I'm going to engage in a lot of talking and motivation. But you always have to listen to others on the team and be inclusive."

Making it even more special, Sabally will be teaming up with her younger sister Nyara who is a current member of the University of Oregon Ducks.

"I'm really excited, we have a great bond on the court," she said of her 21-year sibling.

"We need to be the aggressors in Austria. If we play with heart and grit then we have a great chance."

With her Olympic dream beckoning, Sabally is excited about representing her country and continuing to fulfil a lifelong commitment.

"I've been playing for the national team since I was 13-14 and love wearing the Germany singlet," she said. "There is no bigger platform than the Olympics for an athlete so it would be amazing to get there for my career and things that I believe in.