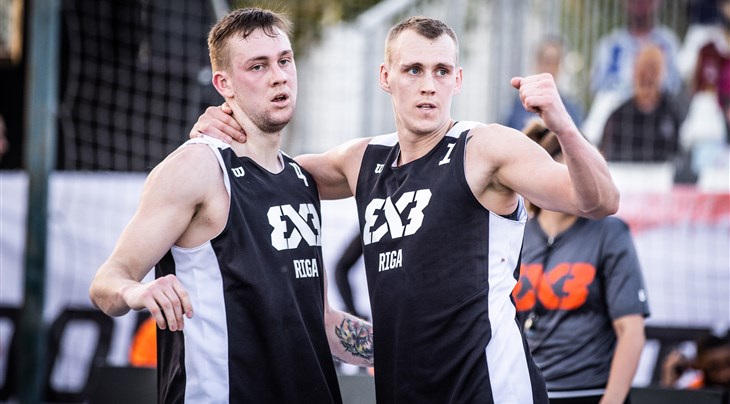 POITIERS (France) – The focus has been on national team play during this crazy Olympic preparation period but the pro circuit starts up again with the Poitiers Challenger on July 2-3.

After the Challengers were on pause in 2020, this will be the second such event this year after Antwerp claimed the Lipik Challenger in May.

Pretty Poitiers has been serving a 3x3 feast with the Women's Series having also being played this week in the scenic western French city.

Having successfully hosted its first Challenger event two years ago, Poitiers welcome a loaded field with some of the mainstays on the Masters circuit looking to get their season into gear.

The top 2 teams in Poitiers will qualify for a FIBA 3x3 World Tour Masters, to be announced at a later stage. 3x3 power Riga headline the draw as the No.1 seed. After fulfilling their dream of qualifying Lativa to the Olympics, these heroes are back playing for their beloved Riga having earned a well-earned breather at the Europe Cup Qualifiers 2021.

You know the names but don't take for granted the magical chemistry of Karlis Lasmanis and Nauris Miezis, who both really should be starring in F9.

There are other serious contenders headed by Amsterdam Talent & Pro after the Dutchmen have taken 3x3 by storm in 2021. The new-look Amsterdam – having secured the prized signature of Serb star Maksim Kovacevic – claimed a first ever Masters victory in Doha earlier this year.

Kovacevic aside, the proud Dutchmen then clinched a ticket to Tokyo with a spectacular performance in Graz. Amsterdam has established stars in Kovacevic and Dimeo van der Horst but also have new sensation Arvin Slagter, who has become a legit 3x3 star with his flame throwing shooting.

Sakiai Gulbele quickly became a force on the World Tour but they started 2021 slowly after exiting Doha winless. Don't underestimate these dudes who are armed with the most lethal uzi seen since the original Terminator with Marijus Uzupis hoping to rediscover his best.

Ub are also one of the top teams and always highly competitive having made the quarters in Doha. They started in impressive fashion by defeating compatriot Novi Sad but exited after falling short in a thriller to that other Serb power Liman.

With the scintillating Strahinja Stojacic in the line-up, Ub can never be underestimated and they deserve their No.3 seed but there will be plenty of challengers in Poitiers – pardon the bad pun.

Lausanne Sport started to click into gear in the shortened World Tour last year with a third placed finish at the Europe Masters.

Gilles Martin is always a lock to be in our top 5 plays, while Marco Lehmann is The Man from deep. We should know whether Lausanne is the real deal early when they play Amsterdam in a blockbuster Pool D contest.

Sakiai aren't the only lethal Lithuanians in this draw. Sixth seed Utena Uniclub don't have their frontline team that shocked the World Tour last year but they should provide a tough challenge to Ub in Pool C.

If you want a dark horse then Antwerp might be your best bet after the Belgians won their first ever Challenger title recently in Lipik.

Lipik MVP Thibaut Vervoort was unstoppable and the 23-year-old gets another opportunity to prove that he's a 3x3 rising star.

Fresh from leading Belgium to a a shock Olympic berth, Nick Celis will be back and out to again show that his game is tastier than Belgian waffles.