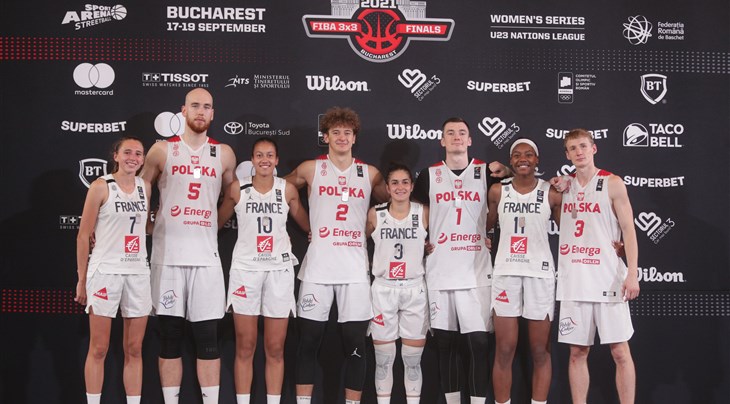 BUCHAREST (Romania) - France's women and Poland's men won the fourth edition of the FIBA 3x3 U23 Nations League, which took place inside a jaw-dropping indoor venue - the Palace of the Parliament - in Bucharest, Romania on September 17-18, 2021.

France capped off an unbelievable season (22 wins, 1 loss) with a one-sided win against the Netherlands (21-7) in the final. After leading her conference in scoring earlier this summer, the speedy 5ft 5in. (1.66m) Hortense Limouzin had a second-best 30 points in Bucharest and was named MVP of the competition. Noémie Brochant, Camille Droguet and Myriam Djekoundade completed the roster for France's women, who won the competition for the second time (after 2018). The future is bright for this team: three of the four players who won the previous edition of the U23 Nations League (in 2019) won a silver medal at the Tokyo 2020 Olympics for the Russian Olympic Committee. Poland took third place in the women's category... and did even better in the men's competition.

After starting the event with a loss against Lithuania, Poland won the next four games by a total margin of seven points. Don't be fooled by the four-point win in the final against the Romanian hosts, the game was tied at 17 before the event top two scorers (in this order) Michal Samsonowicz and Adrian Bogucki buried back-to-back cold-blooded two-pointers, which silenced the crowd. Daniel Golebiowski and Michal Sitnik completed the roster for the White and Red. It is Poland's first-ever title at the U23 Nations League and the continuation of a great month for Polish 3x3 after the senior men's national team's won a bronze medal at the FIBA 3x3 Europe Cup last week. Romania's surprise final run was rewarded in the form of Cristian Mainea taking home the MVP trophy. Russia finished third in the men's category.