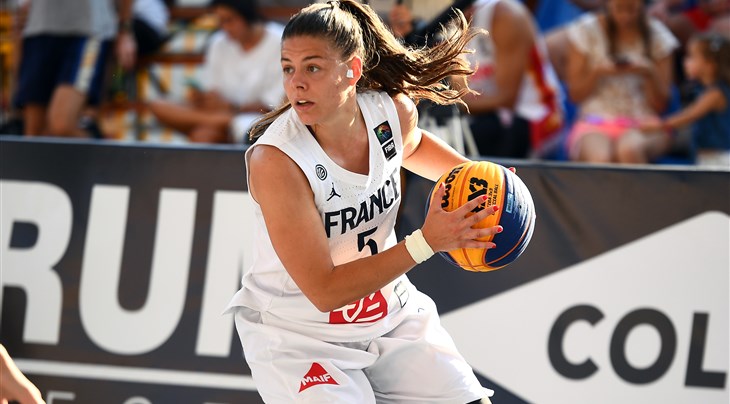 ANNECY (France) - While you binge watch mixtapes of Migna Touré and Laetitia Guapo, 26-year-old Marie-Eve Paget is quietly becoming the most successful player in 3x3 history with a mixture of leadership, 3x3 basketball IQ, sharpshooting and mental toughness.

Paget’s first international FIBA tournament came just 3 years ago at the FIBA 3x3 World Cup 2018 in Manila, Philippines. Paget did not have high expectations for her debut as she was a last-minute substitute for an injured player and felt drained by the humidity and jet lag.

Nevertheless, the French women still managed to make it to the semi-finals but lost in overtime to the reigning world champions Russia.

Despite the tough loss, Paget said, "I think like Nelson Mandela, "I never lose. I either win or I learn." So at the time, it was hard for me to switch my mindset because I was so disappointed to lose but we still had to compete for the bronze medal in 20 minutes. It was something so new for me because in basketball, you have 2 days to breathe and get focused but now we only had 20 minutes! But I also thought at this moment, I will not leave this country without a medal!"

Paget ended the tournament with a bronze medal and led her team in scoring (6th overall) with 37 points across seven games. This was also France’s first medal in 3x3 on the women’s side since the first-ever World Cup in 2012 but not their last. This mentality helped guide the French team to their constant success during the 2019 season. During the 2019 run, France had an 83% winning percentage on the Women’s Series, finished 1st in 6 stops and won the overall Series.

Paget points out as well to the competitiveness, cohesiveness and autonomy amongst her and her 2019 teammates: Migna Touré, Laetitia Guapo, and Ana Maria Filip was a reason for their success. The pinnacle of their season was defending their title at the FIBA 3x3 Europe Cup 2019 in Debrecen. They were at the top of their game.

Though sometimes overshadowed by high scoring teammates, the 5ft 7in. (1.70m) playmaker is no slouch on offense as she was 13th on the overall scoring charts for the Women’s Series in 2019. However, as player, her goal is to play for her teammates to be the best version of themselves. She acknowledges that her way to play is not to score the most but mainly utilize her skills to make space and defense. Clearly, she is effective in what she does as her French teammates rank 1,2,3 in the world in the FIBA 3x3 Individual Ranking.

With the unforeseen pandemic in 2020, it was hard for Paget to let go of the intensity from that summer before, "Every morning since November 1, 2019 (FIBA’s Olympic Qualification and Olympic Qualifying Tournament announcement), I was thinking of the OQT. I practiced for this, I ate for this and I was so ready for the OQT. It was really hard to learn it was postponed." However, Paget’s mental strength helped her refocus to see the benefits of a postponement. With one-year delay and a change of location, Paget had more time to prepare and there would be less effects of travel as the tournament changed from India to Austria.

When asked what she anticipates for the Olympic Qualifying Tournament Paget said, “We know it will be hard, they’re a lot of good teams but we are a good team too. We won’t have the same team as usual but we have new team and new capacity. We will do out best and finally achieve the goal for 2 and half years which is to go to the Olympics. We are ready!”

Beyond the court, Paget also represents 3x3 on the FIBA player’s commission. It is a role that she is happy to undertake to speak on behalf of 3x3 players and become more invested in the discipline she loves. Looking ahead to a post-Olympic world, Paget is confident that 3x3 will be a success and new fans will join the game.

And when all is said and done, we wouldn't be surprised if these fans showed up with Paget written on the back of their jerseys.