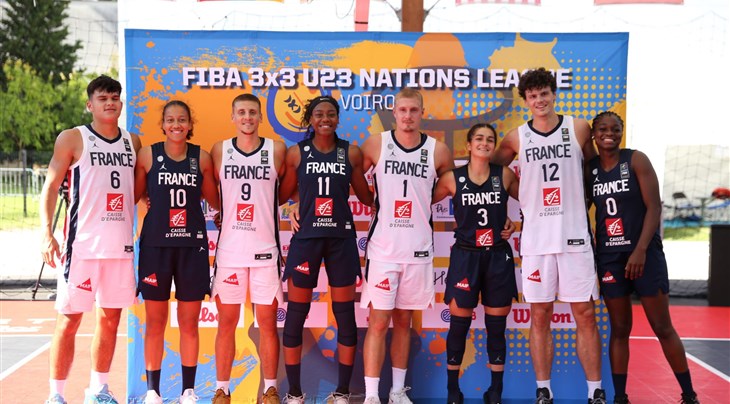 VOIRON (France) - The French, known for their fine cuisine, were cooking in Voiron.

After 6 stops, both the men's and women's French teams have won the Europe-America conference and secure their ticket to the FIBA 3x3 U23 Nations League final, which will take place in Bucharest, Romania on September 18-19, 2021.

The French dominated during the first three stops of the competition, each winning two of three stops.

This time, they were just as good.

On the men's side, at Stop 4, France, playing in their home country, beat Great Britain before defeating Spain 22-20 and then thrashing the Netherlands, 21-10 in the final. At Stop 5, we saw a re-emergence of Israel, the Stop 2 winners. They went undefeated, taking down Great Britain and Spain in the pool stage. In the final, they had to take on France, winner of 3 of 4 stages, winning 19-16. At Stop 6, it was another notch in Israel’s belt, defeating the United States, 19-18 in the final in overtime.

On the women’s side, it was a straight sweep from the French. At Stop 4, France won all three of their games by at least 7 points, including a tournament-best 21-3 beatdown of Great Britain. They dispatched the USA in the final, 21-10. At Stop 5, it was more of the same. While their opponents put up a better fight, France were able to beat the USA 17-16 and the Netherlands in the final, 13-10. It was another powerhouse final at Stop 6, with France defeating the USA 15-13. The team went 17-1 in the 6 stops. Their only loss came in the final of Stop 3 against the Netherlands (7-11).

That moment you realize you have eyes on the back of the head 👀 #3x3U23NL pic.twitter.com/1bNTLaGPBJ

They may have narrowly missed out on a medal in Tokyo but French 3x3 has a bright future.

Stops 4-6 featured USA men's and women's teams for the first time this season after they missed out on the first three stops earlier this year. Neither team was able to come out on top, but both teams averaged more points than any another team in the conference.

The men's team featured four members of the University of Villanova basketball team, while the women's team was comprised of top collegiate talent, including FIBA 3x3 U18 World Cup 2019 MVP, Hailey van Lith.

This means both French teams will be in Bucharest. Israel and the Netherlands in the men, as well as the Netherlands and Spain in the women's category sill have a glimmer of hope they can finish as the two best teams in the overall standings and qualify.