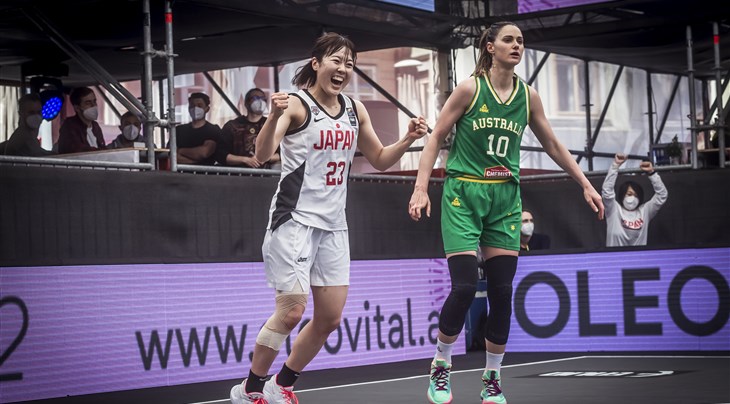 On Day 1, we had six teams go undefeated, including Japan and Austria on the women's side and France, Qatar, Brazil, and Mongolia on the men's.

Let’s take a closer look at the best of the first day of Olympic qualifying.

Japan (Women)
They are sure playing like a team that wants to go for gold in front of their home crowd in Tokyo. Mai Yamamoto was flawless (she had the only the triple-five of the day in the women's category against Austria) and Stephanie Mawuli showed the world that she is a force to be reckoned with. They begin 2-0 to start the OQT and appear to be one of the teams to beat in Austria.

France (Men)
Day 1 was all business like the front of the plane for France. Antoine Eito had his 2-pointer radar on lock, hitting 6 shots from distance and finished 2nd in scoring in the men's category while Dominique Gentil patrolled the paint. They now head into their final two games of the Pool stage as the clubhouse leaders with sky-high confidence, after beating Slovenia and the Dominican Republic. There's nothing like doing it in front of your hometown fans. The Austrian women set the place on fire when they prevailed against their Swiss neighbors in the final seconds to jump to the top of the group and put the field on notice. Who would have thought that the teams who who started the day as the lowest-ranked in the tournament would end up number one in the standings at dawn after beating Chinese Taipei and Switzerland.

🇦🇹 THIS IS HOW YOU BRING THE HOUSE DOWN 😱🤯😤🔥@TISSOT #3x3OQT pic.twitter.com/IC4M0EOxTS

3x3 is a true team game, and this is a thing of beauty. Don't worry, we have our doctors checking to see if Adin Kavgic has eyes in the back of his head.

Mai Yamamoto (Japan)
21 years young and already playing like a seasoned pro. We might as well call Mai Yamamoto 'Ms. Freeze' because she was cold-blooded in Graz. She led all players in scoring on Day 1 with 23 points, including the game-clincher vs. Australia and we think she is just getting started.

Abdulrahman Saad (Qatar)
22 points in two games for a nation that lives and breathes 3x3 is just what the doctor ordered. He put up a triple 5 vs. the Dominican Republic, scorching them for 12 points, 6 highlights, and 6 rebounds in a blowout.

Brazil shows up big for South America (Men)
Who says 3x3 is just for Europeans? Brazil came out firing and won both of their games on Day 1 games thanks in large part to Andre Ferros' 15-point performance.

Switzerland upset Spain (Women)
The group of death was sure to bring us some interesting games and the Swiss were there to meet moment. “Everyone needs to be scared of us and they should,” said Sarah Kershaw after the win. In the big-time moments, you need big-time swag, and they delivered over the Spaniards 16-14.