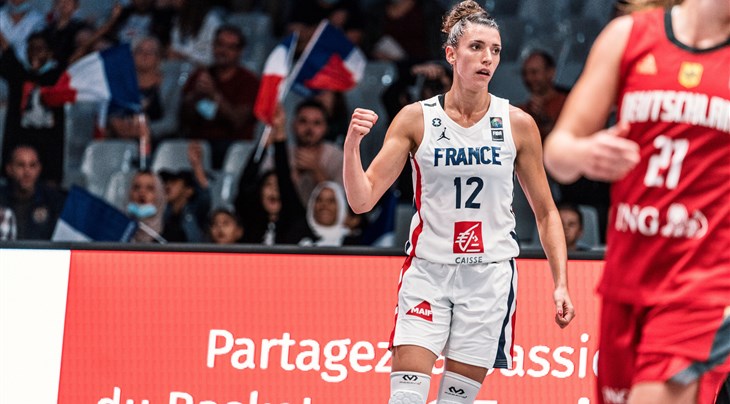 PARIS (France) – The best of the best in European 3x3 are booked to go all out for three days of super action in the French capital this weekend, and Day One of action in Paris certainly didn’t disappoint as some teams laid down a marker in the opening day of the FIBA 3x3 Europe Cup 2021 on September 10.

France fed off the homecourt advantage to dominate in their first two games of the Women’s competition, as a Klaudia-Papp-inspired Hungary also won two from two on Day One, with two Tissot Buzzer Beaters to thank for that, as Russia were undefeated in Men’s Pool action.

Let’s take a closer look at the opening day’s excitement in France.

With their fourth-placed finish during the Tokyo Olympic campaign being classed as a disappointment by some, showing the incredible talent and potential of this French side, the hosts came out firing on all cylinders for their opening day of action in Paris.

Huge contributions from across the roster saw France barely break sweat as they rattled off 43 points in their two games, thumping Germany and Israel 21-12 and 22-10 respectively. A day off in Day Two will set the French up nicely for a run at glory on Day Three, where the knockout rounds begin and they’ll face Romania in the quarter-finals.

The Russians showed their grit as they battled to two hard-fought victories over Israel and Netherlands on Day One of action. Alexander Zuev was naturally at the heart of all his nation’s good work, as he bagged 11 points across the two games, but it was Daniil Abramovskii that led in that regard as he notched 15 along with some big defensive contributions as well. They’ll face the runners-up of Pool B, which concludes tomorrow, in the knock-out rounds on Sunday. Any French player could have taken this honour in the women’s competition, to be honest, but, back to her mesmeric best, the mercurial Migna Toure was must-see television every time she had the rock in her hands on Day One of FIBA 3x3 Europe Cup action.

Leading all scorers in the women’s competition after her opening two outings, and undoubtedly buoyed by the excitable home crowd, Touré will be hoping Sunday is just as successful for her and her teammates as they look to go all the way and win the competition for the third time in a row.

Hungary entertained the French crowd aplenty on Day One of the action as they won both their games with breath-taking Tissot buzzer-beaters from Klaudia Papp and Dóra Medgyessy.

Elegance personified, Migna Touré had her opponents on skates at will in front of her adoring Parisian fans.

This game at its best is all about reactions, and Israel were on top of their game at times when it came to fast hands and quick thinking, as you see here in this quick steal, dish and dunk in the side’s opening game of the competition.