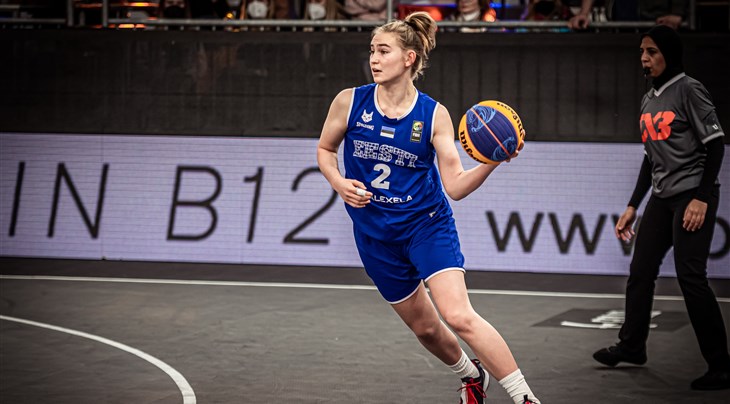 DEBRECEN (Hungary) – The 3x3 action never stops as some of the best women's players will have their dreams on the line at the upcoming Universality Olympic Qualifying Tournament.

Here are five women's players to keep an eye on as they chase the final ticket to the Tokyo Olympics.

The 19-year-old will be one of the brightest young stars in Hungary and the Arizona Wildcats freshman showed her talents with an impressive display at the Olympic Qualifying Tournament in Graz.

Asi eyes buckets and she can hit up any spot through her fancy footwork. Even though she only stands a modest 1.78m (5ft 10in), the teen wonder drives down the lane with no fear and can score on taller defenders.

She's deadly from beyond the arc too and showed her incredible talent against favored Netherlands where she led Estonia to a memorable upset in Graz.

Asi has already proven she can dominate established 3x3 stars and don't be surprised if she continues to do that in Debrecen.

This walking bucket was unstoppable in Graz with a crazy average of 10 points per game. It really shouldn't surprise anyone because the 1.88m (6ft 2in) tour de force steps up on the big stage and in Austria she torched opponents with her mix of explosiveness and sweet shooting.

When the 27-year-old is feeling it there isn't much opponents can do except close their eyes and make a prayer.

Goree is in red hot form but Hungary will hope she hasn't peaked too early because their Olympic dream is on the line now. 3x3 power Italy had a disappointing run in Graz where their hopes flamed out in the pool stage after upsets to lower seeds Austria and Switzerland.

It was through no fault of the team's leader Rae Lin D'Alie aka 'Rae Rae' who continued to go cray cray with 28 points in 4 games.

The 1.63m (5ft 4in) pocket rocket might only be around the same height as Tom Cruise but she continues to prove that lack of height is no barrier to success in 3x3.

She torches opponents with a quick first step and her insane handles make defenders dizzy. Rae Rae is beloved and a sentimental favorite to make the Olympics.

But she'll need to fire for a rattled Italy if the FIBA 3x3 World Cup 2018 champs are to make it to Tokyo. The Netherlands struggled in Graz with the third seed unable to emerge from the pool stage.

But it wasn't all bad news with 21-year-old Kuijt showing she's a rising star after scoring 20 points in 4 games. The 1.80m (5ft 11in) smooth mover attacks the rack with no fear and also has more range than the Starbucks wifi.

If she continues to blossom – and the Bettonvil sisters bring their A game – the Netherlands might just be able to join their male counterparts in painting Tokyo orange. It's little wonder Hungary are a favorite to grab the ticket to Tokyo because they have the best one-two punch in the tournament in Goree and Medgyessy.

The 1.73m (5ft 8in) assassin has made buckets look oh so easy for years but she had a tough time in Graz scoring just 15 points in 5 games. It meant the burden was firmly on her partner-in-crime Goree, who didn't let the team down but clearly can't do it alone.

If Medgyessy can find her old magic in her hometown then Debrecen will be rocking like it's New Year's Eve.