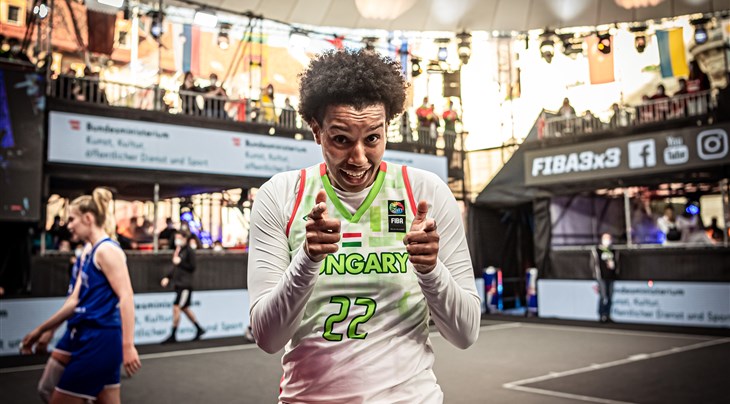 DEBRECEN (Hungary) – The FIBA 3x3 Olympic Qualifying Tournament was more hyped than the Friends reunion and absolutely delivered with the most incredible five days of non-stop action the 21-game has ever seen.

But you want more? Then your prayers have been answered because there are still two golden tickets left for the Tokyo Olympics at the FIBA 3x3 Universality Olympic Qualifying Tournament.

Here are five reasons to watch.

Last ticket to the Olympics

This is it. No more chances! Six teams from each gender will be hungry for success in Debrecen knowing this is the final chance to board a flight to Japan.

This extravaganza pits the highest-ranked teams not yet qualified to Tokyo, who have not been represented in basketball (men or women) in the past two editions of the Olympic Games.

This is where dreams are made of. But there will be plenty of tears too.

Will Italy bounce back?

Italy's high-profile women's team were fancied in Graz but the fourth seed disappointingly fell flat at the pool stage in an early exit.

The FIBA 3x3 World Cup 2018 champs never fully recovered after a heartbreaking 21-20 loss to Spain as Italy were stunned by lower seeds Austria and Switzerland.

Even though they struggled, Raelin D'Alie aka 'Rae Rae' still scored 28 points in four games but it did not matter.

Rae Rae's only quiet game was against Switzerland and Italy could not recover in the 21-11 thrashing. It begs the question if Italy can withstand a poor performance from their dynamo, who will have to once again carry the load in Hungary.

Perhaps a bigger concern is how Italy can rebound mentally after such a flat effort in Austria. They will need to quickly otherwise their Olympics dream is over.

This isn't just a lifeline for middling teams. No way! This is a highly competitive field underlined by some of the most beloved men's teams in the business.

Top seed Slovenia are 3x3 pioneers and if anyone deserves to qualify for the Olympics it's these warriors. Simon Finzgar and Gasper Ovnik create tricks like David Blaine but has the old magic gone?

Not necessarily because Slovenia were still highly competitive in Graz but had the misfortunate of facing Poland in the quarter-finals. It would be foolish to write them off.

Mongolia are everyone's favorite underdog and these dudes want to join their women's counterparts in Tokyo. They inflicted champs Poland's only loss in Graz in an epic contest to highlight a sizzling start for them.

But they struggled to keep it and were upset by lower seeds Czech Republic and Brazil to exit at the pool stage. If they can refocus then there is no reason why Mongolia can't complete the ultimate 3x3 fairy tale.

They are the top two seeds but Hungary, Ukraine, Romania and Belgium are also not to be messed with.

Speaking of Belgium, they impressed mightily in Graz having beaten hoops power USA and just falling short of Lithuania in a thriller.

Nick Celis and Thibaut Vervoort had a better one-two punch than Van Damme and you just know they'll be up for the fight in Hungary.

Can Netherlands make it a double act?

The Netherlands men's stole the show in Graz with a historic achievement of being the first Dutch team qualify in an Olympics basketball discipline.

But the women's team had a tougher time after the third seed were unable to emerge from the pool stage. The Bettonvil sisters struggled and the Netherlands could not survive that despite strong showings from Noortje Driessen and Ilse Kuijt.

You can bet the ultra competitive siblings will be on a mission in Hungary to ensure the Dutch women don't miss out on the orange party in Tokyo.

Are Hungary the host with the most?

Hungry has the x-factor – crowd support! And Debrecen is one of 3x3's favorite destinations with an incredible fan base so the hosts should have an advantage.

In the men's, Hungary's chances rely on Tamas Ivosev aka 'Frankenstein' who destroys opponents in the dungeon routinely for 3x3 GOAT team Novi Sad. He might have to produce a monstrous performance for Hungary to grab a ticket.

But it's the women's where Hungary should feel confident having defeated the Netherlands easily in Austria. They will, however, feel like they missed a chance in Graz having lost a heartbreaker to France in the knockout stage.

Before that defeat, Hungary looked as good as anyone led by walking bucket Cyesha Goree, who torched the Dutch for an incredible 13 points en route to topping the scoring charts with an incredible 50 points from five games.

She might be the best player in Debrecen which could be enough to get her side on a flight to Tokyo.