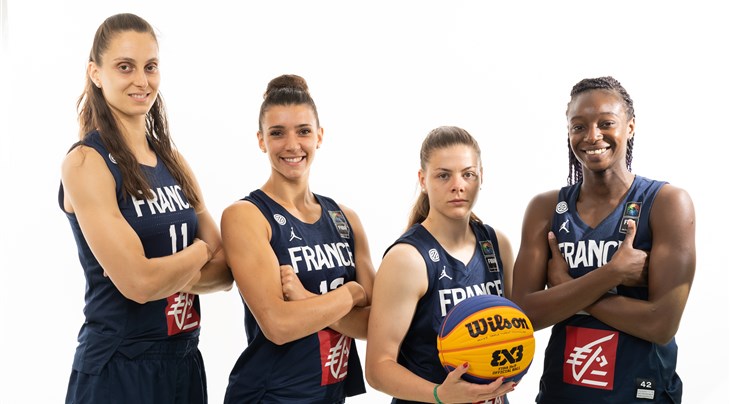 TOKYO (Japan) - The number one 3x3 women’s team in the world has named the four players that will be heading to Tokyo later this month for the first-ever 3x3 event at the Olympic Games.

Following a 5-1 record at the 3x3 Olympic Qualifying Tournament, France, which has four of the five top-ranked players in the world (including the top overall Laetitia Guapo), is one of the favorites heading into the Olympics.

A group of 6 players (4 primary and 2 alternates) has been officially named. The two alternate players will join the team ahead of the event, in case there is an injury or need for a squad replacement. They will leave Tokyo before the first game.

Here’s a closer look at the team:

"The choice was difficult as the level of the group is high. We had to decide, not without difficulty, between maintaining the team that had qualified for Tokyo and adapting to the teams that we will meet at the Games. We decided to go with a team that knows each other well and has already achieved very good results in official competitions… It is a dream come true to play the Olympic Games and we will do everything to come back with a medal. We are all very proud of this historic first participation," said Richard Billant, the France 3x3 Coach.

Most recently this group won the FIBA 3x3 Women’s Series Poitiers Stop on June 29-30, 2021, going undefeated in the process. They have now won 10 straight games in this competition, which they have dominated in the first edition in 2019. It was also the return of Ana-Maria Filip, who had been battling injuries over the past year but was a foundation of the team that won 2 European titles (she was named FIBA 3x3 Europe Cup 2019 MVP) and a bronze medal in the last 3x3 World Cup.

They will begin their journey at Aomi Urban Sports Park in Tokyo on July 24. On Day 1 of the event they're set to face off against the United States in one of the marquee matchups of pool play. It's a chance for France to exact revenge after their OQT loss and an opportunity to size up the USA, a team they could surely meet in a medal game.