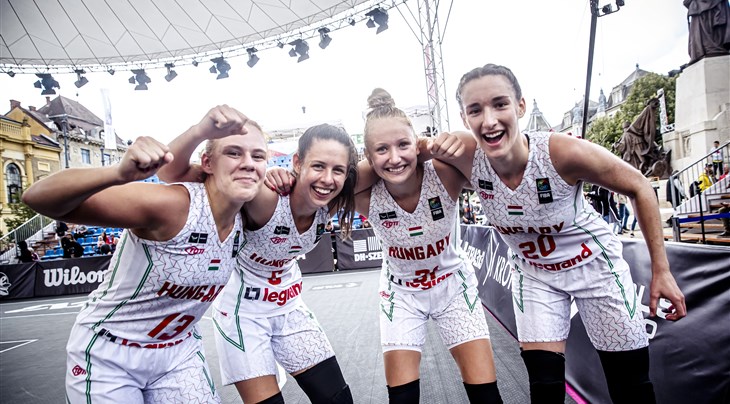 DECRECEN (Hungary) – And then there were eight! We’re down to our Final Fours in the FIBA 3x3 U18 World Cup Men’s and Women’s competitions and saw some incredible battles on Day 5 of action as the quarterfinalists did battle to reach the final day of action in Hungary.

We saw eight titanic battles between 16 sides desperate to extend their stays in Debrecen, and what we were treated to was an exhibition of the very best of the bright future of 3x3 basketball. Read on to find out more about the teams, players and moments that stood out in Day Five!

Creating arguably the day’s biggest upset were the hosts, Hungary, as they bested second-seeded Russia in a thrilling quarter-final match-up that the Hungarians won 21-18. Zita Szabo was unguardable for Hungary as she went off for 10 points in the victory, including four two-pointers, and led her side to the semi-finals. Spain await tomorrow, but Hungary will be full of confidence ahead of perhaps their toughest test yet.

Ukraine has been the definition of perfection in the men’s competition up to today, winning every game with a score of 22 in the Pool Stages, and many will have had them as clear favourites today as they took to the court against Belarus. The Belarusians had other ideas though, as they dominated the Ukrainians from the outset and looked comfortable as they saw out a 21-14 win against one of the tournament favourites. The USA await for Belarus tomorrow in the semi-finals. In Spain’s dominant victory over Latvia, every player on the roster had a big moment, but none more so than Elena Buenavida, as she secured 10 points in the Spanish victory and kept their hypnotic offense ticking over nicely as they left Latvia struggling for answers throughout much of the game. A comeback from the eastern Europeans threatened to materialise at one point, but Buenavida’s composure and scoring led the team to see past that and secure a semi-final spot for Day Six. Now dubbed the Belarusian Damian Lillard, Illia Milasheuski was in incredible form on Day Five as he almost single-handedly put Ukraine to the sword in their quarter-final match-up. From tough twos to crazy assists and dominant drives to the basket, Milasheuski did everything offensively and contributed a lot on the defensive end too. Belarus will need another performance of the like from him if they’re to overcome USA in the semi-finals tomorrow.