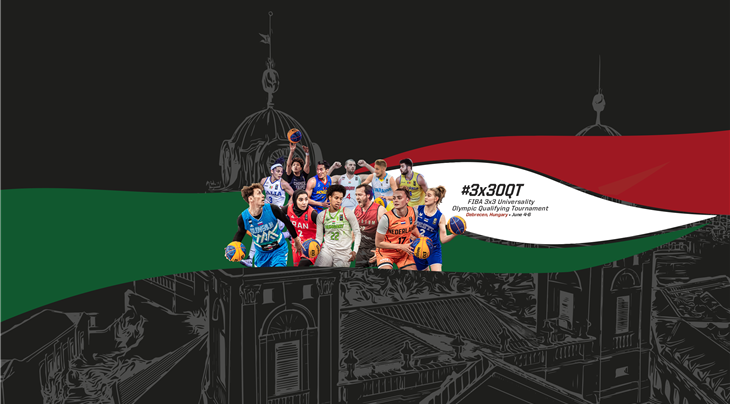 DEBRECEN (Hungary) - It all comes down to this. After an unforgettable Olympic Qualifying Tournament in Austria, there is one final chance for teams to earn a spot in Tokyo. Six men's and six women's teams come to Debrecen, Hungary with only one spot remaining in a winner-take-all format.

Here's everything you need to know about the Universality Olympic Qualifying Tournament, taking place June 4-6, in Debrecen, Hungary.

There are 12 teams – 6 per gender – competing in Hungary.

It's an exclusive club and we only have one spot left.

The winner of the women's spot will join the Russian Olympic Committee, China, Mongolia, Romania, who have qualified as the top 4 teams in the FIBA 3x3 Federation Ranking on November 1, 2019, and the USA, France, and Japan who qualified through the Olympic Qualifying Tournament.

Serbia, the Russian Olympic Committee, and China qualified as the top 3 men's teams in the FIBA 3x3 Ranking along with host Japan. Poland, the Netherlands, and Latvia will join them as well, qualifying in Graz.

After this event, we will know all the teams in the field making their 3x3 Olympic debut in Tokyo.

After a wild Olympic Qualifying Tournament, it seems harder these days to pinpoint who is likely to come out on top. All of these teams can ball and we're used to seeing drama-filled action to the final seconds.

On the women's side, Italy comes in as the number one seed, after underachieving at the OQT, and possesses the talent to earn the final spot. Hungary was the closest team in this field to earning a spot in Tokyo, winning Pool C (while going undefeated), and losing to France in OT in the quarter-finals.

The men welcome back three teams that participated in the Olympic Qualifying Tournament, including Slovenia, Belgium, and Mongolia, who finished 8 through 10, respectively. It's a wide-open field, but the smart money would be on Slovenia, the highest-ranked team coming into the event, who basically invented the modern game of 3x3.

Cyesha Goree (Hungary) was in her bag in Graz, one of the best players on the court. She was the top scorer for the women, scoring 50 points over 5 games, the best mark at the event.

But we also can't forget Rae Lin D'Alie, the Italian superstar that led her team in scoring (28 points). She's electric like a Tesla and goes 0 to 100 on a dime.

The list doesn't stop here. Make sure you check our top 5 women to watch story.

On the men's side, Simon Finzgar, a 3x3 legend, is facing his final shot to make it to the Olympic games. The former number one player in the world is facing plenty of pressure, but he's not alone. Anže Srebovt and the squad were looking like the Harlem Globetrotters in Austria.

We'll also be looking out for Delgernyam Davaasambuu, the number one player in Mongolia, with the chance to join the Mongolian women's team in Tokyo.

For more, check our story on the top 5 men to watch.

If the Universality Olympic Qualifying Tournament is anything like the OQT, we're in for a treat. Emotions were sky high in Graz, with tears of joy, redemption stories galore, and gut-wrenching defeats in the final seconds.

With one final spot on the line, these players know their Olympic dreams hang in the balance. It's the culmination of everything they have worked for, on and off the court, and we'll be there to capture the agony and ecstasy that comes with elite 3x3 basketball.