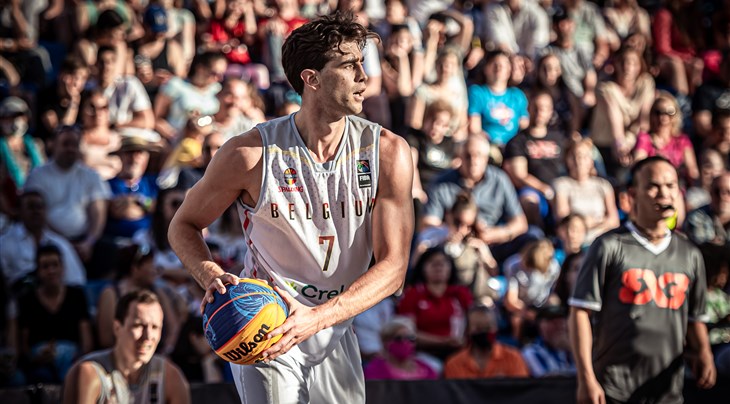 DEBRECEN (Hungary) - In the dying seconds of a gripping semi-final between Belgium and Mongolia, 3x3 newcomer Rafael Bogaerts found himself open beyond the arc for the biggest shot of his career.

The stakes were immense with the final ticket to the Tokyo Games up for grabs at the Universality Olympic Qualifying Tournament in Debrecen. Down 15-14, a Bogaerts miss would mean Belgium's quick rise in 3x3 would be nothing more than a footnote while prolonging Mongolia's Cinderella march.

But the 27-year-old's stroke was tastier than his country's famed waffles as he propelled the underdogs into a final matchup with host Hungary.

"If I'm open I'm going to take the shot,” the tournament MVP said. "I shot it with confidence. I just had to shoot the ball. There was no hesitation.

Rafael Bogaerts with ice in his veins for the @TISSOT buzzer beater to book @belgianlions a place in the #3x3OQT Final! pic.twitter.com/fF0YbH1wti

"There was so much at stake. ..by far the biggest shot of my career."

The ice cool 6ft6in (1.98m) player's shot injected a load of swagger into surprise packet Belgium, who defied the rowdy home crowd and a Tamas Ivosev-led Hungary in a one-sided finale.

"There was a lot of stress involved playing against Hungary," Bogaerts said. "We grew in the game. We had control and were in the zone."

Unlike other teams, Belgium weren't reliant on star power but instead built around four deadly shooters who worked well together like they had been playing together since childhood.

"We played a team brand of 3x3," he said. "All four of us can score and move around without the ball."

Making their feat even more remarkable was that Belgium had just come together with Bogaerts enticed into 3x3 at the start of the year.

"Nick (Celis) called me and asked if I'm interested and want to have a shot at the Olympics," Bogaerts recalled. "I didn't need any more convincing.

"Kids dream of going to the Olympics. This was a great chance and it's a dream of any athlete."

Belgium's eventual success probably shouldn't have been totally surprising after impressing at the Olympic Qualifying Tournament in Graz, where they upset hoops power USA but were unable to get past the pool stage.

"It was a bittersweet feeling but an achievement to beat the biggest basketball nation," he said. "But we could be proud of ourselves and we took the confidence to Debrecen.

"There was no party after the USA game. We immediately focused on Debrecen."

After achieving success in Hungary, Bogaerts immediately called his "proud" parents knowing he and his teammates had helped put 3x3 on the map in a country without a major hoops tradition.

"My phone was almost dead from all the calls and messages (after the Hungary game)," Bogaerts said. "It was an amazing weekend."

After beating USA and then with the encore of booking a ticket to Tokyo, can Belgium win a 3x3 medal at the Olympics?