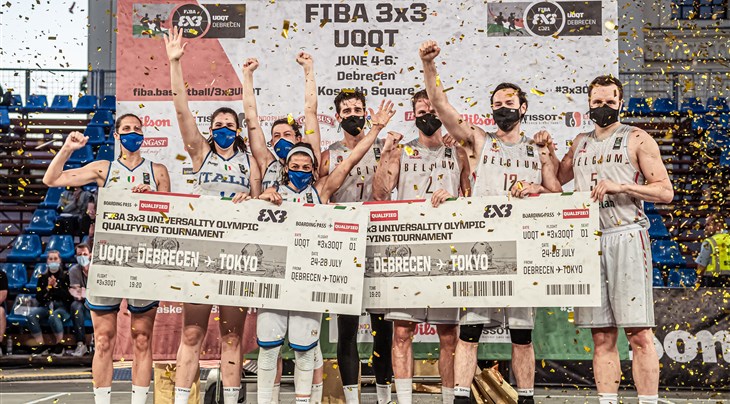 In the women's category, Italy secured their spot thanks to a Tissot buzzer-beater courtesy of World Cup 2018 MVP Rae Lin D'Alie in a nail-biting final against Hungary (13-12) in front of thousands of (vaccinated) local fans. The 5ft. 4in. dynamo (1,63m) was named MVP of the event.

Italy join France, USA and Japan - who qualified at the FIBA 3x3 Olympic Qualifying Tournament in Graz last week - China, the Russian Olympic Committee, Romania and Mongolia, who had already qualified for the Olympics based on the FIBA 3x3 Federation Ranking on November 1, 2019.

In the men's category, an undefeated Belgium defeated hosts Hungary in the final 21-14, carried by Thibaut Vervoort's 9 points in the final. Nick Celis contributed with the only triple-five (5 points, 6 highlights and 6 rebounds) of the entire tournament in the men's category. Rafael Bogaerts - who scored an unbelievable Tissot buzzer-beater against Mongolia in the semi-finals - was named MVP of the men's competition.

Belgium join Latvia, Poland and the Netherlands, who got their tickets last weekend in Graz, and also Serbia, the Russian Olympic Committee, China and Japan , who had already secured their spot based on the FIBA 3x3 Federation Ranking on November 1, 2019.

3x3 will make its Olympic debut in the Tokyo Olympics on July 24-28.