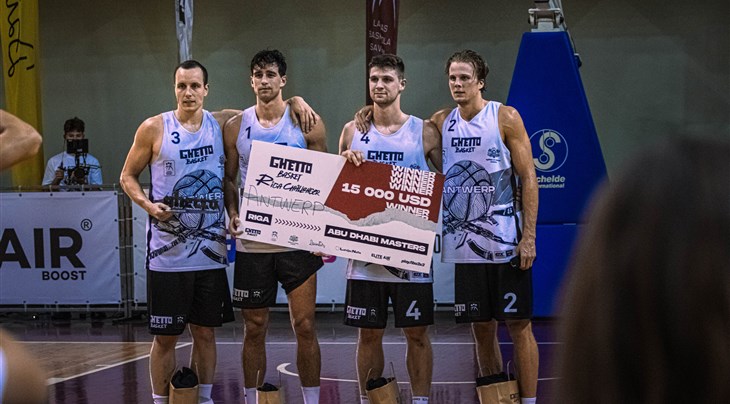 RIGA (Latvia) - Antwerp can now add another trophy to their shelves in 2021, winning their third Challenger of the year, this time at Ghetto Basket Riga 2021.

It was another MVP performance from Thibaut Vervoot, leading the team in scoring and P-VAL. But the hero of the day was Bryan De Valck, who hit the Buzzer Beater in the final to propel the team once again.

Hometown favorites Riga finished as runners-up in front of a packed crowd.

The day began with Dusseldorf LFDY (GER) and Runa (RUS) each advancing through the qualifying rounds and entering the pool stage.

The first game of Pool A would set the tone for the two-day event. Down 19-20, Nauris Miezis hit one of the best game-winning shots you are going to see. Riga (LAT) prevailed with a 21-20 win and advanced to the bracket along with Raudondvaris Tauras (LTU).

Šakiai Gulbelė (LTU) put a smack down in Pool B, defeating Dusseldorf LFDY and holding Utrecht to only 9 points in their contest. Darius Tarvydas was against excellent for the Lithuanians, leading the field in P-VAL (36.6), key assists (7) and rebounds (30). Dusseldorf LFDY also advanced to the bracket.

Pool C was dominated by Ub (SRB), relying once again on 'The Maestro', Dejan Majstorovic who scored 26 points. Antwerp who was defeated by Ub in the pool, needed to beat Reval (SLO) for their spot in the bracket. Rafael Bogaerts went off, scoring 7 points and raking up a 12.7 P-VAL; the man was everywhere and Antwerp advanced, 21-16.

Finally, in Pool D, Maksim Kovacevic was dominating for Amsterdam Talent&Pro (NED), scoring 10 points in a huge win over Princeton after defeating Grizinkalns earlier on in the day. Princeton also advanced to the bracket by defeating the Latvians, 21-15.

The bracket included 7 of the top 8 ranked teams, setting us up for a big second day.

Antwerp started the quarterfinals by outlasting Raudondvaris 16-9 in a defensive battle, keeping their hopes of a third Challenger title alive. Amsterdam got past Dusseldorf LFDY in a game where nobody was hitting, but Amsterdam was more proficient under the basket, winning 12-10 in overtime.

It was all Darius Tarvydas for Sakiai vs. Princeton. He scored 7 points, including three 2-pointers, while grabbing 7 rebounds in a 19-17 victory.

The top matchup of the quarterfinals was between Ub and Riga, playing in front of a loud and proud crowd. Tied at 18-18, in overtime, Karlis Lasmanis said give me the rock. The man has ice in his veins. He hit the Tissot Buzzer-Beater to win 20-18 and move on to the semifinals.

In the first semifinal game, Thibaut Vervoort was off, scoring just one point, but the rest of Antwerp picked him up. Fellow Olympians Nick Celis and Rafael Bogaerts combined to score 10 points in the 14-12 win.

Riga was not going to let down the home fans in their semifinal, defeating Sakiai, 21-15. It was Nauris Miezis' time to take over, scoring 11 points in the game. Artūrs Strēlnieks played the Edgars Krumins role perfectly, contributing a pair of 2-pointers.

The final was one for the ages.

Thibaut Vervoort has established himself as one of, if not the best big-game player in 3x3 right now. The sharpshooter scored 10 points and tallied 6 highlights in the 20-18 win.

But, it was Bryan De Valck who stepped up in the end hitting a crowd-silencing Tissot Buzzer-Beater as time expired to win the title. It was not how Riga envisioned going out, with their fans in attendance, but the Belgians are one of the hottest teams in the world.