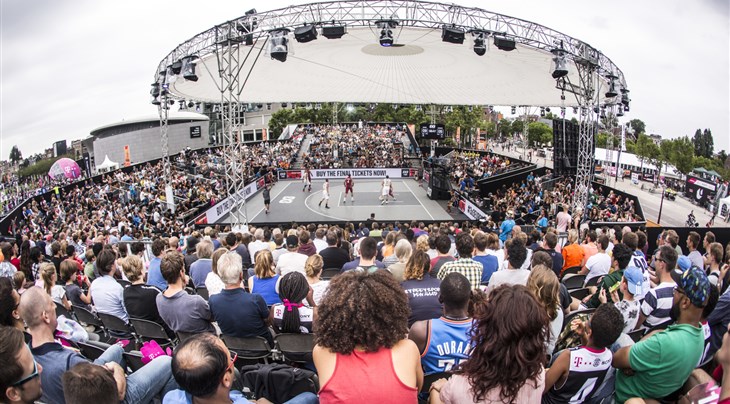 ANTWERP (Belgium) - The seventh edition of the FIBA 3x3 World Cup will take place in Antwerp, Belgium in June 2022.

The city was meant to host to the Crelan FIBA 3x3 Europe Cup 2020 before the event was cancelled due to the COVID-19 pandemic.

The FIBA 3x3 World Cup 2022 will be held in the week of June 20 and hosted by the Belgian Basketball Federation and organized by Sportizon/Golazo, in cooperation with Flanders, basketball Vlaanderen and the City of Antwerp and take place on ‘Groenplaats’, one of the most iconic squares in the historic district of Antwerp.

''The historic district of Antwerp promises to be one of the most spectacular urban backdrops in 3x3 history. We’re excited to be in such a young and dynamic city and region, for what will be the first World Cup after 3x3's Olympic debut in Tokyo later this year.''

Twenty men's teams and 20 women's teams (including the Belgian hosts) will compete in Antwerp.

China’s women and USA’s men have won the latest edition of the FIBA 3x3 World Cup in Amsterdam, Netherlands on June 18-23, 2019.

''The FIBA 3x3 Basketball World Cup will allow Flanders to get to know a young and dynamic Olympic discipline'', says a proud Flemish Minister for Sport Ben Weyts. ''This hip and urban form of sport and exercise will stimulate and inspire young people even more. I strongly believe that the World Cup will offer an added value for the further development of basketball in Flanders.''

''EventFlanders and we have done everything possible to bring this top-level event to Flanders, after the unfortunate cancellation of the Crelan FIBA 3x3 Europe Cup due to the Coronavirus. This World Cup will bring together basketball fans from all over the world in Flanders and create hope and employment for the event sector and our entrepreneurs in hospitality who have been heavily impacted'', adds Flemish Minister for Tourism Zuhal Demir.

Antwerp’s Councillor for Sport, Peter Wouters, is delighted with this 'new opportunity': ''After missing the Europe Cup, the city picks up a fantastic rebound with this World Cup and puts Antwerp on the map as a vibrant, dynamic city of sport and an urban hotspot. Antwerp is aspiring to play a pioneering role in urban youth culture and sport. The FIBA 3x3 World Cup fits perfectly in that urban picture and is additionally giving a sustainable boost to basketball in Antwerp''.

Koen Umans, President of Basket Flanders, also sees plenty of opportunities in this World Cup: ''It’s a postponement not a cancellation: our teams will be even better prepared to compete in the World Cup in June 2022. Thanks to the support of Flanders and the City of Antwerp, we will create a high-level event together with event organiser Sportizon/Golazo. We are sure to offer a unique experience to both players and spectators. We are keen to make the 3x3 World Cup a catalyst for the development of 3x3 in Flanders. 3x3 basketball will continue to claim its place on the map in the Flemish basketball landscape through various actions and initiatives in the coming years.''