All we learned from first-ever FIBA 3x3 AmeriCup 2021 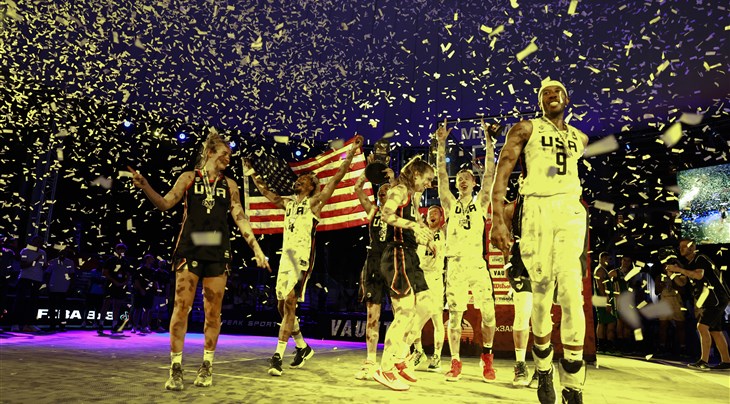 MIAMI (USA) - The history making FIBA 3x3 AmeriCup 2021 lived up to the hype with a three-day spectacle in Miami on November 12-14.

The first-ever battle of supremacy among the Americas - following in the footsteps of iconic continental events in Asia, Africa and Europe - had it all with hosts USA enjoying a double delight to issue a statement to the world.

Let's look back at everything we learned from this lit tournament.

USA justified their favoritism tag in both men's and women's events after taking double gold in front of the home fans.

After missing out on the Tokyo Olympics, the new-look men's side had a point to prove and entered Miami as something like a redeem team.

Even though their talent was undeniable - highlighted by the debut of recent NBA player Charlie Brown Jr - the USA still needed to find chemistry on the fly. They did exactly that with a 5-0 record and impressively survived challenges in the knockout stages.

Brown Jr was electric in his first time representing the red, white and blue but it was a team effort with newcomer Trey Bardsley looking like a veteran while FIBA 3x3 World Cup 2019 winners Kareem Maddox and Canyon Barry provided the composure when things got tight.

It was a resounding message for USA who are desperate to prove their hoops domination extends to men's 3x3.

There was no revenge needed for USA women's who won gold in Tokyo but a totally new lineup was unveiled in Miami. It didn't matter because USA's awesome foursome were 3x3 Wonder Women on the court as they destroyed the field.

Brionna Jones deserved the MVP with a lights out performance but it was an even team effort with all four players finishing in the top 10 in overall scoring.

There is no doubt - USA women's are the gold standard in 3x3 and it's going to take a lot to knock them off their perch.

Everyone knew this 6ft. 6in (1.98m) athletic marvel can ball - he showed glimpses of his undeniable talent the last couple of NBA seasons with Oklahoma City and Atlanta.

3x3, however, is another challenge and can prove difficult to get used to initially. But Brown Jr had no worries in his 3x3 debut with a equal top 41 points from 5 games and provided enough highlights to fill a SportsCenter segment.

He developed chemistry quickly with his teammates and appeared a natural fit for 3x3 - his explosive athleticism, long range shooting and rangy defense were the perfect tools for the 21-point game.

Brionna Jones was the star of stars

In a city full of stars, USA's women felt right at home. This team was absolutely loaded led by FIBA 3x3 World Cup 2014 winner Cierra Burdick who diehards might recall back then melted social media by dunking in warmups and she hasn't lost a step since.

But it was her fellow 6 ft. 2in (1.88m) teammate Jones who was the standout in Miami with 41 points in 5 games. The towering 26-year-old combined with Burdick on D to make it almost impossible for opponents to even see the basket - let alone score.

No one should be surprised by her starring role having enjoyed such a memorable 2021, where she's been named a WNBA All-Star and also taken her talents to the EuroLeague Women.

Winning gold for her country caps off a remarkable year for one of the best in the business.

Puerto Rico's comeback tour continued in Miami although they came home empty-handed with both men's and women's teams falling short in the bronze medal games.

Still, it's amazing to see an OG country get back on the 3x3 map. It started on the FIBA 3x3 World Tour when San Juan won the Lausanne Masters and they finished runners-up at the last stop in Mexico City.

Their revival has been highlighted by an avalanche of Tissot Buzzer Beaters and TJ Fernandez added to the list with a long bomb to call game against Dominican Republic in the pool stage.

The speedy Fernandez could not be stopped as he finished equal leading scorer with Brown Jr but Puerto Rico's dream year was halted in tight losses to USA in the semis and then in the bronze medal game against foe Dominican Republic.

The 9th seed women's team also added to Puerto Rico's success by beating No.3 seed Chile in the quarters before running out of puff against top-ranked teams USA and Canada to finish fourth.

Star Mari Placido was everywhere with 29 points and 5 games to be one of the best players in the tournament and help ensure something we've all slowly realized in 2021 - Puerto Rico is back, baby!

Dominican Republic and Puerto Rico's rivalry in the men's is heated

The best games of the tournament? They might just be both games featuring Dominican Republic and Puerto Rico - maybe the best rivalry brewing since the beef between Drake and Meek Mill.

Both games were finished with Tissot Buzzer Beaters but Dominican Republic emerged happiest having won an epic bronze medal contest capped off by scenes of jubilation.

We can't wait for the next time these two rivals square off. Make sure you have some popcorn ready.

Sassa not only was named in the team of the tournament but her cheery personality also won her a new batch of fans.

Quite clearly, Brazil are a powerhouse in the region knocking off Canada to sit behind USA in the pecking order. And they've set their sights on even more glory after qualifying for the FIBA 3x3 World Cup 2022 in Belgium.

Miami is a perfect 3x3 destination

Think Miami and these words come to mind - entertaining, glitzy and addictive. Pretty much sums up 3x3, right? After being the site of the first-ever FIBA 3x3 World Tour Final in 2012, 3x3 returned to Miami.

Quite simply, 3x3 and Miami - one of the most famous cities in the world - are a match made in heaven.

Things were so hot at Bayfront Park that even Floyd Mayweather had to be there and he was naturally all money with the Wilson.