All we learned from FIBA 3x3 World Tour Prague Masters 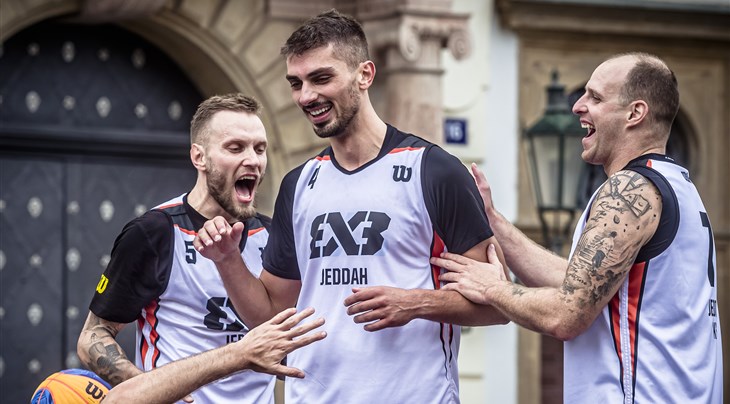 PRAGUE (Czech Republic) - The FIBA 3x3 World Tour has gone up a level this season and fans were left once again in shock after a truly memorable Prague Masters on September 18 and 19.

3x3 has been wilder than the reaction to Kanye's new album drop and the two-day spectacle at Prague Castle - an iconic World Tour destination - added another chapter to what is fast becoming the greatest ever season on the pro circuit.

Let's look back at everything we learned from the fifth masters of 2021.

Put your hand up if you thought Jeddah would go all the way? Underdog Jeddah have become the latest feel good story after claiming the first Masters title for a Saudi Arabian team.

The No.8 seed did it the hard way with a first up loss to No.1 seed Liman and only scraped into Day 2 after beating highly talented Gagarin who featured a trio of Olympic silver medallists.

But they lifted a gear with an impressive run on Day 2 as they beat Lithuanian teams Sakiai Gulbele and Utena Uniclub before an almighty knockout of Liman in the decider.

Jeddah had been a dangerous team in the past thanks to their dynamic one-two punch of Nemanja Draskovic and Kevin Corre. But the additions of Lausanne Masters 2015 MVP Ovidijus Varanauskas and Dejan Mlakar have made all the difference.

The added firepower made Draskovic even deadlier and he had a game-high 7 points in the final and was named MVP after finishing first in points, drives and player value.

Just add Jeddah onto the growing list of teams who have made the leap this season.

What's the biggest surprise this season? It might just be that Liman and Riga have zero titles combined after five Masters so far this season.

To be clear, their standards haven't slipped but the quality of competition just keeps getting stronger. We are legit at a time now when every team in the draw can win - the Masters isn't dominated by a few powerhouses anymore.

Liman have been as ever a consistent force and looked to break their drought in Prague by reaching their first final of the season.

With Aleksandar Ratkov - an Olympic bronze medallist - leading the way, the Serbs were on track until spectacularly being derailed by Jeddah in the final.

They, of course, missed sharpshooter Stefan Kojic with replacement Nebojsa Kilijan unable to kill it on the court as he normally does. But they will be disappointed with a missed opportunity to get on the board in 2021.

Ditto for Riga who to be fair were without two Olympic Gold medallists - superstar Nauris Miezis and Edgars Krumins who has not returned since Tokyo. The mixing and matching of the line-up has affected their famous chemistry with Riga for years consisting of the same awesome foursome.

Karlis Lasmanis aka 'Batman' is used to being the main hero but he couldn't save Riga with a cold-shooting performance in the quarters against Utena.

We all know a full-strength Riga is still a team to be feared but, right now, they look vulnerable.

These Russians have long been hyped up and it was justified when their young guns led ROC to a silver medal in Tokyo.

These dudes are fearless and love playing in international events with Russia finishing fourth at the recent FIBA 3x3 Europe Cup 2021.

But playing on the World Tour has proven harder for Gagarin who had a trio of Olympic silver medallists in Prague. They admittedly were in the 'Group of Death' alongside No.1 seed Liman and eventual champ Jeddah but there should be no excuses.

24-year-old dynamo Alexander Zuev, who has performed so brilliantly on the biggest of stages, couldn't hit a bucket in Prague as Gagarin once again had an early exit.

They should feel extra disappointed having lost a thriller to Jeddah and then watching the Saudi Arabians go all the way in stunning fashion.

As we mentioned earlier, 3x3's depth just keeps getting deeper. Jeddah shocked the field but they weren't the only ones to surprise.

No.7 seed Pirot (previously known as Zemun) reached the semis although these Serbs should never have been underestimated with well-known players in their line-up, including Bogdan Dragovic aka the 'Dragon' who breathed fire in Prague.

Lithuanian teams performed well in Prague but you well know Sakiai Gulbele and Utena Uniclub. But another team from Lithuania to keep an eye out for is Marijampole Mantinga who made the quarter finals the hard way from qualification.

With Tautvydas Kliucinykas lighting it up from deep, the newcomers gave Antwerp and Liman all they could handle.

They loom as another emerging team on the crowed 3x3 World Tour.

It's Miller Time in Prague

What time is it? It was Miller Time in Prague with one of the best to do it Vadim 'Miller' Poddubchenko taking out the crown.

It was an impressive victory for 'Miller' who dethroned Piotr 'Grabo' Grabowski - ending the Pole's unbeaten run in 2021.

It took something special to break 'Grabo's' streak and Miller produced with an epic performance, including one perfectly rated dunk that has to be seen to be believed.

Sit back and enjoy but just don't try and copy these dunks in the backyard!