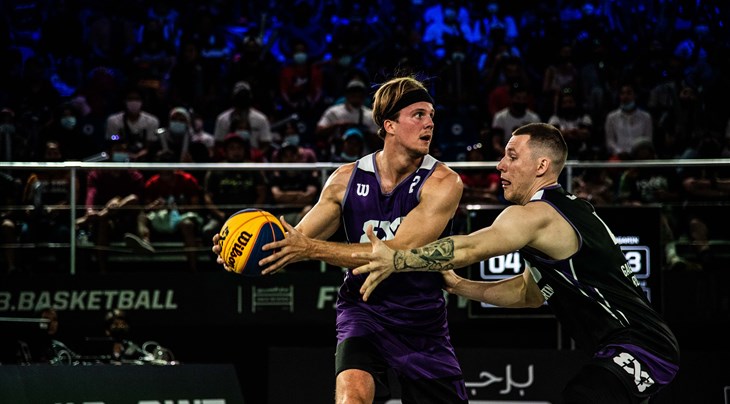 ABU DHABI (United Arab Emirates) - After a breather, the FIBA 3x3 World Tour returned in style at the Abu Dhabi Masters with a powerhouse finally getting on the board in 2021.

During the first-ever Masters in Abu Dhabi, 3x3 made a memorable comeback in one of the sporting capitals in the world with a reloaded Riga ending Ub's long winning streak in a classic final.

Let's debrief on an epic resumption of the World Tour before the focus shifts to the Mexico City Masters on November 6-7.

Riga are back in business

Did you really think Riga were going to remain winless in Masters for much longer? They just needed to get the gang back together to break their drought.

The awesome foursome - who are all Olympic Gold medalists - had not played together since the decider at the Tokyo Games and they showed no rust with their famed chemistry returning seamlessly.

MVP Karlis Lasmanis was unstoppable with a tournament equal best 36 points while his sidekick Nauris Miezis hit a slew of big shots. Both, quite predictably, made our top 5 plays of the tournament and were superheroes as per usual.

But Riga are so much more than their dynamic duo and they welcomed back with open arms sharpshooter Edgars Krumins, who had not played since injuring his ankle in the Olympic Gold medal game.

The sniper came up huge against Ub and so did the ever reliable Agnis Cavars, who remains the glue guy.

Riga's balance was best underlined in the final when all four players scored 5 points or more. The Latvians are back as the complete package once again and that should scare the entire World Tour more than any Halloween costume ever could.

Ub have not lost any friends

Could they actually do it? For a brief moment it was hard not to think Ub were doing some sort of Novi Sad 2018 impression when the GOAT World Tour team won 32 straight that season.

Ub got to a very impressive 14 straight wins - made more remarkable considering the World Tour's increased depth these days - before narrowly falling to Riga in a game that could have gone either way.

It was still a successful tournament for Ub who have reached the final in their last four Masters. Miroslav Pasajlic might just have to audition to be the next James Bond because he's a flat out assassin. He added to his growing reputation with two Tissot Buzzer Beaters in Abu Dhabi.

Strahinja Stojacic finished first in player value in Abu Dhabi and got great news the following day as he became the new number one 3x3 player in the world.

Antwerp need to take the next step

The Belgians have been a feel good story in 2021 after rising from nowhere to sit fifth on the World Tour standings at the pointy end of the season.

Antwerp have performed remarkably well given their inexperience on the pro circuit. They've reached the knock-out rounds at all five Masters they've competed and reached the semis three times, including in Abu Dhabi.

They looked the goods in the UAE capital having easily defeated former Masters champs Princeton and Utrecht on Day 1 before providing a beat down to Gagarin in the quarters.

But they once again ran out of puff in the semis and this might have been the most disappointing exit of them all after a 21-12 thrashing to Riga.

Hopefully it won't start being a curse for them because there is a lot to like about Antwerp headed by Thibaut Vervoort who finished with the highest scoring average (7.5) in Abu Dhabi.

From now on, you can bet they won't be satisfied with semi-final finishes. They want to take the next step.

Ub are the only team to have won multiple titles while powerhouses Liman and Novi Sad remain winless.

The shock value wasn't quite there in Abu Dhabi compared to Masters before the break but gauging teams tournament to tournament is proving harder to read than your handwriting.

Being successful at a Masters does not guarantee anything. Prague Masters champs Jeddah and Lausanne Masters winners San Juan PCI Group are proof of that after winless campaigns in Abu Dhabi.

The World Tour this season has achieved the type of parity that is uncommon in sports leagues globally.

Perhaps the biggest upset in Abu Dhabi was in the Filipino Times dunk contest where diminutive Filipino David Carlos aka 'Air David' upstaged Ukrainian great Vadim 'Miller' Poddubchenko who had won in Prague to add to his bulging trophy cabinet.

'Air David' turned the switch off on 'Miller Time' with an outrageous dunk over three volunteers.

It was an upset for the ages much to the enjoyment of a strong Filipino contingent in the bleachers.