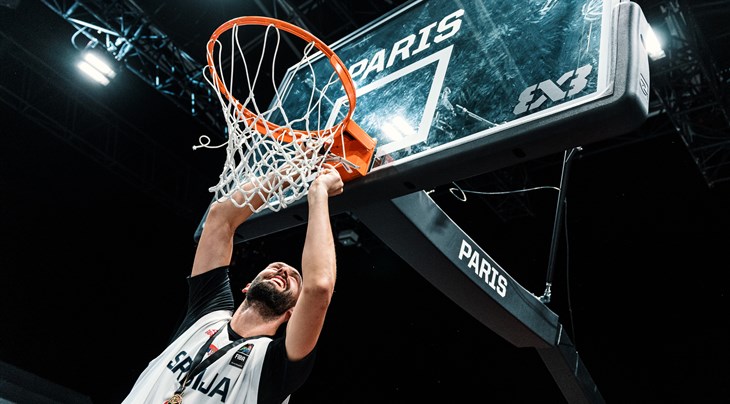 PARIS (France) - The FIBA 3x3 Europe Cup returned with a bang during a three-day spectacle on September 10-12 in an iconic location.

Europe's premier competition returned after a one year break due to the Covid-19 pandemic and some things remained the same with a new-look Serbia completing a hat-trick of titles with a stunning triumph in front of the Eiffel Tower.

Host France, however, couldn't follow suit in the women's and fell short in the semis as Spain clinched their first crown.

Let's reflect on everything we learned from an insane tournament.

Serbia have long set 3x3's standard but the powerhouse had a major blow when they fell short of their gold medal Olympic dreams in Tokyo.

There was intrigue on how they would bounce back. They had a rocky start after being upset by Ukraine in the pool stage but - like they always do - Serbia produced their best when it mattered most.

The No.1 seed rose to the occasion in the knockout stage with victories over host France, Russia who boasted Olympic silver medalists, and Lithuania in a fairly one-sided final.

With their deep pool of talent, Serbia reminded everyone why they remain a team to be feared.

No Bulut, no worries. It must be the envy for other teams that Serbia can replace him with a player of Pasaljic's calibre.

The dynamic 26-year-old is quickly becoming one of the very best players in the world after a scorching hot last few weeks. Pasaljic took home the Debrecen Masters MVP after leading new sensation Ub to glory and even outdid that by winning top honors in Paris.

He, of course, had plenty of support in Serbia's star-studded team, Mihalio Vasic in particular was a beast inside, but Pasaljic stepped up in the big moments to finish with 28 points from 5 games and top overall in key assists.

Pasaljic led Serbia with 8 points in the final as the ball went into his reliable hands every time they needed to make a key play. He made social media melt with his insane handles causing defenders to trip up.

The Pole who stole the show

Poland's chances of making some noise in Paris seemed to evaporate when their main man Michael Hicks aka 'Money in the Bank' was a late withdrawal.

The No.8 seed needed a new hero and up stepped Przemyslaw Zamojski, who was possessed at the Europe Cup like he was auditioning for a horror film.

He was absolutely lights out in Paris with a massive 46 points from 5 games - 13 more than anyone else. But none were bigger than his Tissot Buzzer Beater against Russia to win bronze.

Poland were knocked out early in a disappointing Tokyo Olympics campaign but thanks to Zamojski's fireworks have won silverware in 2021.

The last time Spain played at the Europe Cup, they were heartbroken after a crushing OT loss to France in 2019.

Fast forward two years and the Spaniards avenged that heartbreak to claim their first ever Europe Cup in style.

Superstar Sandra Ygueravide was sensational with a tournament best 41 points from 5 games to walk away with the MVP.

The No.6 seed defied the loud local crowd to defeat France in a tough semi-final to gain revenge and then beat a physical Germany in the decider.

Even though they missed a spot in the Olympics, Spain have started to make a leap in 2021 after triumphs in Women's Series stops in Mies and Montreal.

Their confidence was rewarded with the ultimate triumph in Paris to ensure their status as a European powerhouse is complete.

🗣️"We've been waiting for this for too long!"

France aren't the host with the most

France came away empty-handed in both men's and women's much to the disappointment of the local fans.

There were high hopes in particular for the women's team who came into the tournament determined for a three-peat of Europe Cup titles after the shock of not medaling at the Tokyo Olympics.

The No.1 seed rolled through to the semis until they were stopped in their tracks by a pumped-up Spain. But at least this time they did not trip up in the bronze medal game after beating Russia - who boasted several OIympic silver medalists,

Marie-Eve Paget was spectacular as usual to make the team of the tournament and superstar Migna Toure did what she does best - make buckets.

But Laetitia Guapo, who entered 2021 as the No.1 women's player, struggled to find her best just like in Tokyo and that was enough for France to fall just a little short.

But a podium finish at least provides some consolation.

Germany is making noise in women's 3x3. WNBA star Satou Sabally lit up the OQT in Austria but she wasn't around here. Some thought Germany had no hope without the young gun but they were dead wrong.

The No.12 seed appeared to make up the numbers after a big early loss to France but defied expectations with an incredible run which included thrilling wins over fancies Hungary and Russia.

The tall Germans played a tough brand of 3x3 marked by brilliant defense which suffocated opponents.

Sonja Greinacher lived up to the hype with a dominant performance where she was the most intimidating player down low. She finished top overall in rebounds to earn a spot in the team of the tournament.

Having earlier claimed a maiden title in the Women's Series at Constanta, Germany are emerging as the real deal.

🇩🇪 Svenja Brunckhorst with another delicious dish, but this one is for a @TISSOT
buzzer-beater to send @DBB_Basketball to the #3x3Europe Cup final! pic.twitter.com/5OROVc2daG

Paris is a lit 3x3 venue

There might not be many more beautiful and iconic places in the world. In front of the iconic Eiffel Tower, this Europe Cup was particularly special and the energetic fans added to the incredible atmosphere.

This was a little teaser of what's ahead three years from now. In case you've forgotten, 3x3 will make its Olympic encore at the Paris Games where dreams will be made in front of the Eiffel Tower.

No wonder they call it the city of love.