All we learned from 3x3 Lausanne Masters 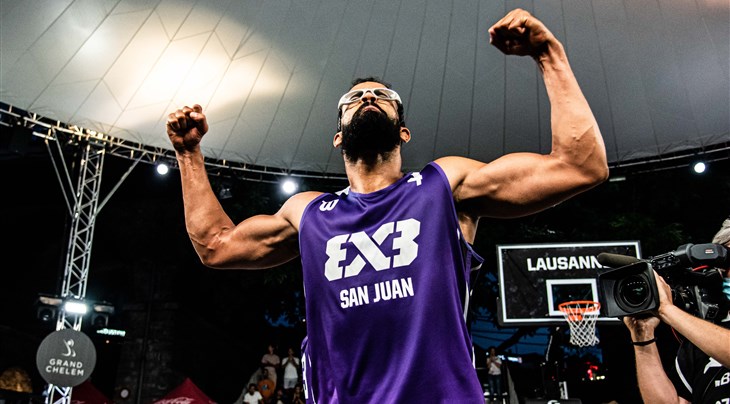 LAUSANNE (Switzerland) - With Olympic fever in the air, quite fittingly the FIBA 3x3 World Tour returned with a bang during an unforgettable Lausanne Masters on August 20-21.

With this season's World Tour back in gear after the Tokyo Games, let's look back at what we learned from the second Masters of 2021.

Puerto Rican 3x3 is back!

San Juan will always be part of 3x3's history books having won the first ever World Tour Final in 2012 in Miami.

But the Puerto Ricans were subsequently overtaken, especially by Europeans, and fell off the 3x3 map.

San Juan's last appearance on the World Tour was a lowly 11th placed finish at the Montreal Masters 2019 - their only sighting that year.

But as we well know, 3x3 is totally unpredictable and San Juan defied the odds in Lausanne to go all the way as the 12th seed.

Legendary Puerto Rican 3x3 player Gilberto Clavell rewound the clock with an inspired performance, where he topped the scoring charts with 40 points - including 12 in the final against Ub,

And he formed a devastating one-two punch with MVP Angel Matias, who was a miracle worker in Lausanne with three Tissot Buzzer Beaters. It completed a giant-killing run where they also beat Riga - who were stacked with Olympic Gold medalists - and world No.1 Liman.

Puerto Ricans bring so much flair to the court and San Juan's celebrations were memorable too.

The 'Maestro' rediscovered his sweet touch

Dejan Majstorovic aka the 'Maestro' is one of 3x3's best ever players having been a key part of powerhouse Novi Sad's line-up over the years. He moved to rival Ub after a disappointing shortened season last year.

The move didn't return dividends immediately with the 'Maestro' struggling at the Doha Masters with just 12 points in 3 games.

There were fears his best was behind him but the 'Maestro' answered the critics at the Tokyo Games, where he helped Serbia win a Bronze medal.

And he continued his revival with a starring role in Lausanne to lead Ub to the final, where they fell short against San Juan.

The 'Maestro' had his best Masters in two years and finished with 32 points from 5 games and No.1 in player value (33.3).

There is clearly plenty left in the tank for one of 3x3's greats.

The World Tour is no longer just dominated by a handful of teams. We keep seeing the emergence of new talented teams and in Lausanne it was German team's Aachen Der Stamm's turn to stand up.

Having gone through qualification, their impressive quarter-final run included a thrilling victory over 3x3 power Novi Sad - who were shorthanded without Dusan Bulut - and they only narrowly lost to NY Harlem in the pools and Antwerp in the quarters.

The Germans played a free-flowing style and led the scoring charts with 20.3 ppg with 23-year rising star Kostja Mushidi the standout.

Remember the name because Aachen Der Stamm have arrived.

Vervoort continues to be Must Watch TV

Thibaut Vervoort aka 'Must Watch TV' is living up to his nickname (though we're still looking for a new one) - which just has to be one of the very best in 3x3.

He has taken to 3x3 like a duck to water and in just six months is now one of the very best in the business. Vervoort was the breakout star of the Tokyo Games, where he nailed a trio of Buzzer Beaters to lead underdog Belgium to fourth place.

In Lausanne, the 23-year-old led rising power Antwerp to the semis with 28 points from 4 games. He was the overall leader in highlights and key assists as he keeps getting better and better in a scary sign for opponents.

You just can't switch the channel when Vervoort is lighting up your screen.

Riga's trio of Olympic Gold medalists came back to earth with a big thud. After the dizzying heights of Tokyo, Riga were stunned by San Juan in the quarter-finals in an upset for the ages.

Even though he hit the greatest ever 3x3 shot, which sealed Latvia's Gold medal over ROC, there was no hangover for Karlis Lasmanis who went straight back to work.

'Batman' fired on all cylinders with a tournament best 8.3 ppg but he lacked support with his partner-in-crime Nauris Miezis having an unusually quiet Masters.

With Miezis' losing his superpower, Riga were short on weapons with sharpshooter Edgars Krumins missing after injuring his ankle in the dying stages of the Gold medal game.

Krumins may be overshadowed by the dynamic duo but he's such a key part of Riga, whose chemistry and continuity give them an edge on the field.

Arturs Strelnieks has been a long-time member of Riga and tried hard but could not make up for Krumins' absence.

The 1.95m (6ft 5in) powerfully built Krumins will be welcomed back with open arms when he returns.

Grabo is from another planet!

He had a challenge in Lausanne against newcomer Yohan Lemay from France but 'Grabo' once again was too good and he's making his insane dunks look too easy.

Sit back, relax and enjoy these ridiculous dunks from this unstoppable Pole.