3x3 stars Ratkov and Touré rise to world No.1 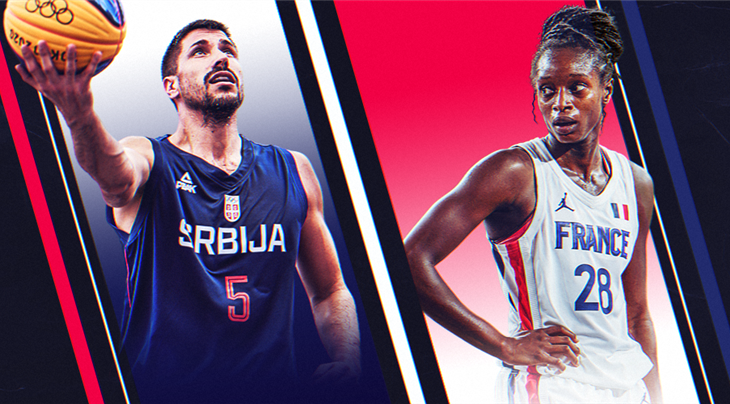 Newly crowned Latvia Olympic gold medalist Nauris Miezis had been the number one player in the men's category since April 1, 2021 while French marvel Laetitia Guapo was sitting on 3x3's throne since September 1, 2019.

Both stepped down after losing ranking points from the 2019 season (the points are valid for a duration of 12 months though special measures were in place after the rankings were frozen for a year at the start of the COVID-19 pandemic) on August 3 for Miezis and August 1 for Guapo.

They have been replaced with Ratkov soaring to the top of the men's ahead of his compatriot Mihailo Vasic and Miezis, who moves down to third.

The 29-year-old Ratkov has tremendous 3x3 IQ in a Men's Health cover type body. The Liman star is sometimes overshadowed by high-profile teammates but he brings great driving skills, clever passing, big time rebounding and elite defense. He ranked 2nd overall in rebounds, 3rd overall in 1-point percentage (for people who played at least 10 games) and was 5th overall in player value last year at the World Tour.

He was a key part of Serbia's bronze medal winning team in Tokyo with the No.1 seed's only defeat being a shock 21-10 semi-final upset against ROC.

Ratkov has long been a star for World Tour power Liman and he led the team in scoring at the Doha Masters earlier this year, where he poured in 28 points from 4 games.

He forms a deadly duo with big fella Vasic, who was also part of Serbia's team in Tokyo where he scored 38 points from 9 games and shot 70% from inside the arc. In the women's, the brilliant Touré has some consolation after No.1 seed France failed to reach the podium in Tokyo after a roller-coaster run.

But it wasn't through the lack of effort from Touré, who shrugged off a slow start to rediscover her best in the knockout stage to get France so close to a medal.

The Women's Series 2019 MVP finished fourth in total points with 54 from 10 games but was also a force on the defensive end to record the second most blocks in Tokyo.

The athletic 1.80m (5ft 11in) Touré came into Tokyo red hot having been MVP in the Women's Series Voiron stop and also part of France's victorious Poitiers line-up.

She moved ahead of Guapo, who has been number one for nearly 2 years, and another compatriot Marie-Eve Paget whose wizardry with the ball was one of the highlights of 3x3's Olympic debut.

With a loaded back half of the year on the men's and women's pro circuit - to quench your Olympic thirst - there might plenty of turnaround atop the world rankings.

But right now, Ratkov and Touré wear the crowns.