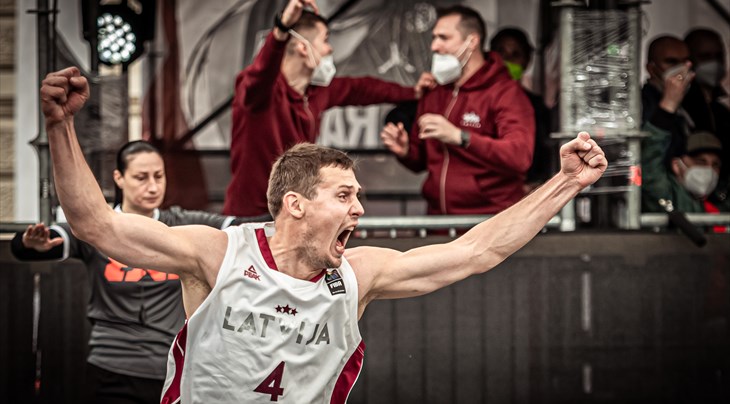 RIGA (Latvia) - Agnis Cavars has been through it all with Latvia.

The number 10 player in the world and member of Riga on the World Tour, has accomplished nearly all that he set out to do since he first started playing 3x3 in 2016.

But, as the de facto captain of Riga, the 34-year-old adds leadership, toughness, and grit to the team. That was no more evident than this past year when he led all players in rebounding and helped propel the squad to their first World Tour Final victory in 2020.

His country is now ready to recognize those efforts, having named him the Latvian flag-bearer at the opening ceremony of the Tokyo 2020 Olympics. In fact, Cavars was given this honor a month ago, after Latvia qualified for the Games. He just couldn’t tell anyone.

"I knew the news a month ago because they congratulated me and told me that I was going to carry the flag. It was an emotional moment, but I couldn't tell anyone…I kept the secret until today. So yes, it was like CSI... don't tell anyone," he said with a laugh.

While he was able to tell his wife, his teammates were completely in the dark. He was happy to share this moment with them once the news broke. He describes himself as the "father" of the team, a title given to him by the younger guys. The moment they learned he would be given this privilege, they acted like one big family.

“We went to the bus and I think Nauris (Miezis) first read that I am going to be carrying the flag and everyone ran to me to jump around and said congrats and everyone was excited. So yeah, it felt like a moment between family members.”

The President of the Latvian Olympic Committee, Zorzs Tikmers, was the one who called Cavars to deliver the good news and praised the resilience of the team and its captain. "They know the road we went through, all the injuries, all the tough stuff that was happening to get us the Olympics. They followed us step-by-step."

Looking ahead, Latvia is set to make its Olympic debut against Poland on Day 1 of the competition. This unique, one-pool style play, is a different format to other international competitions, such as the FIBA 3x3 Europe Cup and FIBA 3x3 World Cup.

Cavars is ready for the challenge.

As the leader of the group, he knows that everyone who has made it to the Olympics deserves to be there and can play at a high level. While he is not going to be relied upon for the bulk of the scoring, he hopes to make his impact on and off the court. "I like to lead by example. I try to give energy in the games, extra energy. Sometimes we are down and I try to get the juices going. In practice, I try to be a role model that does everything correctly and not cut corners."

His leadership style has brought Latvia to the edge of greatness and the chance to earn the first gold medal in 3x3 history. He'll wave the flag proudly during the opening ceremony on Friday, July 23, 2021, a dream of dreams for every athlete around the world.