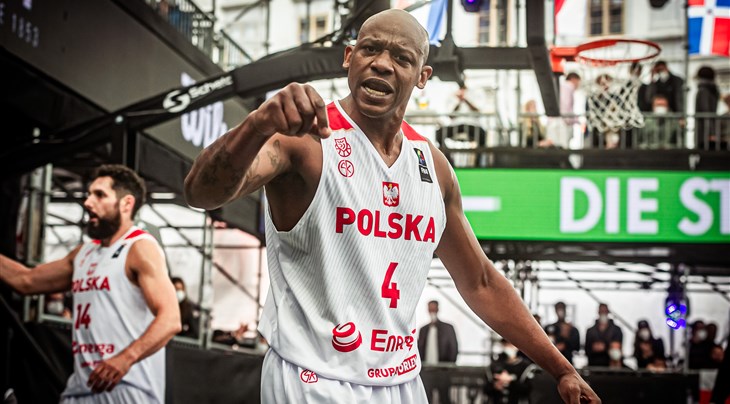 GRAZ (Austria) - Michael Hicks aka 'Money in the bank' is usually all swag on the court with the Poland 3x3 superstar either splashing shots or trashing opponents with smack talk.

But on the eve of the all-important Olympic Qualifying Tournament, Hicks was unusually subdued after injuring his middle finger of his shooting hand after hitting the backboard while going for a layup during a game in Serbia.

The 6ft3in (1.90m) well-built player who resembles a Marvel superhero was in a lot of pain. He immediately knew he had suffered a nasty injury and soon enough Hicks' entire hand swelled up.

Was his dream of qualifying for Tokyo in doubt? No chance.

"I thought I might have to get it cut off and have one less finger," Hicks said. "There was no way I was going to miss out on Graz."

Sure enough, the indestructible Hicks made it to Austria but was only a self-confessed 70% fit having also battled calf issues. Even though his super powers had been limited, Hicks' presence was enough to spark Poland on a magical run where they were the first team in Graz to book a ticket to Tokyo with a thrilling victory over mighty Latvia.

Normally his jumper is all cash, but a clearly hobbled Hicks' stroke was more unpredictable than the stock market.

But he fought on and inspired his team through hustle, a bucket load of passion and the occasional big basket when needed. He still finished with a highly respectable 37 points from 6 games.

"I couldn't feel the ball," Hicks said. "But I didn't want to make excuses. It was more of a mental adjustment.

"I knew my shot wasn't going to be there so I had to focus on the other aspects of the game like rebounding and passing."

Hicks, who was incredibly emotional after Poland sealed an Olympic berth, felt "surreal" in the aftermath of Graz and the newly-minted Olympians were rewarded handsomely by Poland's Basketball Federation with gifts.

But the realization that he's about to fulfil a lifelong goal and become an Olympian has sunk in. For the ultimate baller, Hicks is refocusing and feeling content knowing a big burden has been lifted off his sizeable shoulders.

"I was more nervous before Austria," he admitted. "When I was a kid I would watch every event at the Olympics. It was always my dream to one day be at the Olympics so there was a lot of pressure."

No one is better at dealing with pressure than ice-cool Hicks, who famously willed Poland to a Bronze medal at the FIBA 3x3 World Cup 2019 which kick-started their Olympic run.

Far from being overawed by the occasion that is beckoning, Hicks has his own approach for dealing with the hype.

"I'm back to normal. I'm treating the Olympics like a normal tournament," he said.

And there's only one thing on his mind in Tokyo.

"We should be only thinking of gold because we're one of the best teams," he said. "It will be satisfying being there because it's a once in a lifetime experience but I won't be happy if we don't win gold."

It is quite fitting that one of 3x3's most popular and entertaining players – who represents so much of the 3x3 culture – will have his chance to show the world his mighty talents on the biggest stage of them all.

"I always knew I had the capabilities," he said. "I love showing my skills on the big stage. I focus on big tournaments - that's where I want to really play well and not everyone can do that."

Like couples on The Bachelor, 3x3 and Hicks have been a perfect match. "The one-on-one game, fast offense and fast defense, the intense competition…it's one of the most entertaining games in the world," he said.

"It's like the fourth quarter of a big playoff game. The stakes are huge and it's intense, which I love."